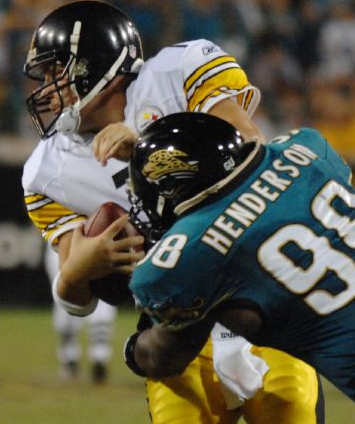 There it is.  The play of the game.  If John Henderson brings Ben down, it's a long field goal for a hobbled kicker.  It's third and everything.  Roethlisberger makes the throw to Hines Ward in a remarkable display of grit and determination, thereby giving the Steelers enough life to score the go-ahead touchdown and put down the Jaguars.  Not that it should have come down to this one play, the Jaguars had every chance in the world to win this game, but mistakes and sloppy play have the Jaguars at 2-3 overall and 3rd in the AFC South.

2-3, 3rd in the AFC South.  That turns my stomach.  I don't know who I was watching last night.  I saw a team with no identity, no bread and butter, no drive.  Everything we knew about the Jacksonville Jaguars going into this season is completely and utterly wrong.  The team can't even rely on a powerful running attack to drive the ball down the throats of the Steelers defense.  Fred Taylor and Maurice Jones-Drew combined for less than 40 yards, something that must change for the Jaguars to have any shot at a winning season.

Yes, we're at that point, the point where we have to seriously consider the the thought of even contending for the playoffs rather than our gilded dreams of Super Bowl rings and division titles. Sure, it's early, the Jaguars have about as easy of a schedule after their bye week, with games against Cincyi, Detroit, and Cleveland, this of course after we get past the offensive machine that is the Denver Broncos.

The Jaguars are hurting right now.  Mike Walker and Rob Meier both have Sprained MCL's, and Brian Witherspoon has a Jammed Kneee.  The emergence of Mike Walker as a serious receiving threat was perhaps the only bright spot of the entire game, so losing him puts the Jaguars back a step as far as pass-catching goes.  Dennis Northcutt is available, considering that he's been deactivated for the last two games.

Losing Meier hurts, but I'm a big, big, big fan of Tony McDaniel, who will have to step in and step up against Denver.

The dream is not lost, that's for sure.  It just seems like it'll be a whole lot harder to get there than we ever thought.  The Blitz happy defense we expected out of Gregg Williams needs to return to the safe and comfortable Cover 2 of Mike Smith.  The linebacker play out of the Jaguars, especially Mike Peterson is remarkably worse than last season.  Either Mike Peterson is getting old really fast, or the scheme is putting our LB's in all the wrong places.  Denver is going to pass and pass and pass against our suddenly weak secondar and if I were Jay Cutler, I'd look for Will James on every snap.  If he takes the field on Sunday, I may just turn off the TV.  He has no buisness being on this roster under any circumstance.  Maybe if we put 8 defensive backs on the field and he's covering the Bronco's 6th wide receiver.

But, as always, Wednesday's are for looking forward, which means that we turn our attention to the Denver Broncos.  My good friend at Mile High Report covers them, and is probably the best Sports Blogger anywhere in the world, so be sure to drop them a line.

I'll be back later today with some more positive and forward thinking stories.