Jaguars get confidence boost: What's Next?

Share All sharing options for: Jaguars get confidence boost: What's Next? 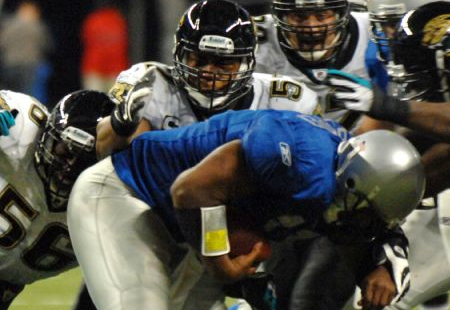 Observations of a Rout:

As we observed yesterday, the benchmark for a quality victory revolved around the systematic reduction of the Detroit Quarterback situation to rubble.  Were the Jaguars to slide out of the Motor City with Drew Stanton and Daunte Culpepper on their feet, the Jaguars would have failed, regardless of the final score.  Seven sacks were recorded, adding to the mere 11 notched all season.  Everyone got a piece of the action: Daryl Smith and Derrick Harvey had 1.5 each, Clint Ingram, Rob Meier,  Jimmy Kennedy and Derek Landri combined for four more.  Pressure was found everywhere, the long passes to Calvin Johnson were more the result of his remarkable ability to catch the uncatchable rather than any particular failure on the part of the Jaguars.

Speaking of Calvin Johnson, I was obsessed with the one-on-one battle between Johnson and Rashean Mathis.  I've been a little hard on Mathis so far this season, but considering the difficulty in covering Johnson, I thought he did a remarkably good job.  I have not yet watched the film to note the coverage, but when they were both making a play on the ball, Rashean seemed to get his hands up and break up the play.

As a unit, the defense played tight, hard and well-coached.  The few bright spots for the Lions offense were the result of broken plays and the outstanding young players in Johnson and University of Central Florida running back Kevin Smith.  Hang in there Detroit, you'll get back into it.  Just stockpile draft picks and stay away from free agents and it'll happen.

It is tempting to look at what the Jaguars accomplished on the ground yesterday and think that the Jaguars of old are back.  Unfortunately, this was a tease.  We won't know if the move of Dennis Norman to left guard is a hit until it faces the Tennessee Titans.   Let's not forget, however, that Fred Taylor is now the 18th player in NFL History to rush for over 11,000 yards.  It was fitting to see Taylor cross the threshold to greatness while Maurice Jones-Drew hammered the Lions for three touchdowns.

Would you believe that Jerry Porter AND Troy Williamson caught touchdown passes?  Would you call me a liar if I told you that ten Jaguars caught passes?  David Garrard was crisp and clean with his passes.  Jerry Porter caught two passes, both of which showed that he just might do what we paid him to do.  Even Williamson got a piece of the action, which delights me far more than it should.

Jack Del Rio, as we're told today by Vic Ketchman, is on the doorstep of his 51's win as head coach of the Jaguars.  After what it took to get to 50, imagining the Jaguars sending the Titans back to Nashville with their first loss seems to be a little on the limit of what I can imagine at this point.  Not to be a downer, but the Jaguars are going to need to prove that they can keep this up if they've got any shot against the Titans.

We'll break this down a little more closely as the week goes on, but for now, remember that sometimes a scrappy team with nothing to lose (the Jaguars) can make a statement against an undefeated powerhouse who honestly needs to drop a game sometime between now and the playoffs.