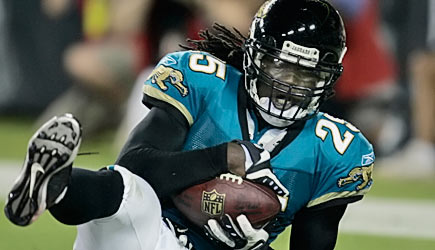 Well that was fun: Jaguars give the Home Crowd a good showing!

For the first time in 4 weeks the Jacksonville Jaguars go into the locker room with a win. About damn time if you ask me, the Jaguars season has been far too upsetting. Without being too much of a downer, this game should have been put away long before Reggie Nelson's interception. Dennis Northcutt, Marcades Lewis and Greg Estandia all dropped important passes, though Northcutt did have 5 catches for 127 yards and a TD, so he'll be forgiven.

Speaking of the receivers, we can now assume that Matt Jones and Dennis Northcutt will be on the roster in 2009. Mike Walker

Maurice Jones-Drew had a great day with a pair of touchdowns, one passing and one receiving, but only 12 carries for 48 yards. Without Garrard's 31 rushing yards, the Jaguars only ran for 63 yards against one of the worst run defenses in the league.

Jack Del Rio earned his 50th win as an NFL head coach, which is a nice honor. While we're quick to criticize the guy, he's done very well during his time in the league.

The Defense did a bit too much bending but it did not break, though the Jaguars allowed far too many passes on 3rd down.

Daryl Smith left the game with a groin injury, with a short week that could be bad. Jerry Porter got "bad news" according to Del Rio, he'll probably be IR'ed.

Play of the Game:

David Garrard, 4th quarter, QB Draw with 3:25 left in the 4th quarter. David gets the critical conversion, fumbles, and has the focus to fall on it. It was the epitome of Jaguars football, hard yards, terrifying, and occasionally exhilarating.

David Garrard: Two Passing TD's, no interceptions, 21 of 33 for 238 yards, 105.3 passer rating. He dinked and dunked and made the big play when it was needed. Dennis Northcutt would be here had he not dropped the critical 3rd down pass.

Maurice Jones-Drew is the first Jaguar to have three seasons of 10 or more touchdowns.

Don't forget, let us know in the comments if you're going to the Indianpolis v. Jacksonville game on Thursday!