The Trials and Tribulations of James "Shack" Harris

Share All sharing options for: The Trials and Tribulations of James "Shack" Harris 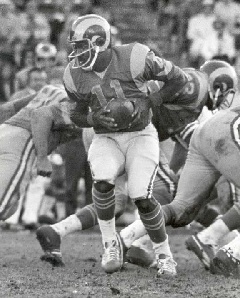 Michael Wright, the best of the best as far as I'm concerned when it comes to the Florida Times-Union and their coverage of the Jacksonville Jaguars, sat down with James "Shack" Harris for a surprisingly revealing discussion about his past, present and future with the team. It's no secret that the Jaguars will make some significant changes, the most obvious of which would be firing the man who stocks the cupboard for Jack Del Rio's team. Unfortunately for the Jaguars, it's just not that simple.

The Jaguars do not have a "final decision maker", aside from the obvious role of Wayne Weaver. Del Rio, Harris, and Executive Director of College and Pro Personnel Gene Smith go over the tape of the available players and draft picks and then come to what they call a "Jaguar Decision", the unified agreement of the three men. Harris explains:

Well, I think I need to tell you a little bit about the process. Our process is a thorough process. Our scouts grade the entire NFL throughout the year. They grade every player, including all the free agents. When the season is over, our coaches grade the players and free agents that are available. We’ll then have a discussion to talk through those players. After that, when that list is narrowed down, Gene, Jack and myself – we’ll watch those players together. We believe in making decisions off of tape and after that, we’ll get together and discuss it, set our board and we’ll make a decision accordingly. That’s what we call a Jaguar decision.

The problem with this management structure is that it leaves an obvious gap in accountability. No individual can be absolutely singled out for blame. It's a pretty unusual setup to have a trifecta of decision making rather than one final call. Bill Polian of the Colts, Scott Pioli of the New England Patriots, and A.J. Smith of the Chargers certainly don't operate that way. It's a system that, in my opinion, leads to groupthink and poor results, particulary evident in the Jaguars first round draft picks. But then again, Harris contends that although they operate in a unified decision structure, he's the final say in the first round:

The way it’s set up during the draft, I have the final say. But what we try to do is by watching tape – and also, coaches have different systems they put in and we try to give the coaches players that they think can fit their system and help them win – so when we evaluate we’re usually attracted to the players that we mostly agree on.

When pressed as to what happens over differences of opinion and which players were contested, Harris elects to punt:

How many times has it happened? I don’t want to get into the numbers. But there have been times we’ve gone to another player that we feel better about as a group.

Can you talk about any players in particular where everyone didn’t agree? That’s kind of an in-house issue.

Of course it's an in-house issue, the "Jaguar Decision" method only protects the group when it's process is secure. If it came out that Del Rio, Smith, or Harris disagreed, it would undermine the ability of the group to insulate their individual job security. It's a feel good idea, this concept of a unified choice, but it's also a self-serving method for ensuring that one person cannot be singled out. The lack of accountability allows bad decisions to linger.

Michael Wright asks about the draft picks and free agents, let me tell you, some of the responses are pretty amusing.

Taking Reggie Williams [with the eighth pick in 2004], we thought that was kind of an eight-player deep draft. We tried to make some trades and we couldn’t. The players beyond that (drafted behind Williams) all had some concerns, including Reggie. But we thought for us – after doing our research – that Reggie was a good fit. There were a couple of tackles there, but we had [Marcus] Stroud and [John] Henderson. So we would’ve been stacking our roster instead of extending the roster. In spite of that, Reggie has contributed to us winning. He’s the Jaguars all-time leader in touchdown receptions in a season (10). He’s also been a big part of our running game. So he has contributed. [Emphasis Mine]

Ah, the Jaguars would be in such a terrible place right now if we were worried about re-signing Tommie Harris, Johnathan Vilma, Shawn Andrews, or even Ben Roethlisberger right now rather than looking toward end of Reggie's career in Jacksonville. And to cite his run blocking, seriously, that's almost offensive. He basically admitted to reaching for Reggie, as if it's excused that the 8 players in front of Reggie were so vastily better than the other first round graded players that you could just pick anyone. If there was any indictment for throwing out the entire trifecta, his name is Reggie Williams. If the Jaguars needed a downfield blocker, they should have drafted a blocking Tight End!

Marcedes Lewis, who we feel is one of the best blocking tight ends in the league and will improve as a receiver..

Vic: Marcedes Lewis has to become an Antonio Gates-type of player for the pick to have been successful. Lewis was not drafted for his blocking ability. He was drafted to become a star pass-catching tight end, in the mold of Gates, Tony Gonzalez, etc.

Matt Jones with the way he’s begun to play...

I don't think I need to explain why this is ridiculous.

Oh, another nugget in the interview is the debunking of the "James picks the first, everyone else 2nd-7th" round picks.

For some reason, there’s the assumption out there that you’re in charge of the first-round pick and after that it becomes a total collaborative effort. How does it really work? It’s the same process I explained before. That’s the process we use throughout the whole draft. [Laughing] That’s an interesting concept. But that’s definitely [just something being said] outside the building.

The obvious downside to the "Jaguar Decision" model is that there is no way to single out someone for poor performance. Based on what Harris tells us about the system, the only way to remove the problem would be to remove James, Jack, and Gene, since they all came to a unified decision on every player, good or bad.

But that's obviously not going to happen. Though Let's entertain an idea. Long-time readers know that I'm rarely a "fire so-and-so" fan. This is a thought experiement, not a manifesto for fixing the Jaguars. Let's assume that James Harris is removed and the Jaguars seek to bring in new talent at GM. Would Scot Pioli for any money come to Jacksonville and join the trifecta? Absolutely not, a General Manager worth the money would insist on being the final decision on who wore the teal and black. Any General Manager willing to join in the groupthink is not a decision maker I want in Jacksonville. The problem, in my opinion, is not in the decision makers, it's in the shared authority of the process. The absence of accountability is absurd.

Wayne Weaver, for better or for worse, must identify who the final decision maker is in the selection of talent, both free agent and draft, and make that decision absolute. While it will bring with it the great responsibility of being that decision maker, it's something that will structurally alter the way the Jaguars make decisions. We know that our coaches can coach, we've seen that. We know that they can identify talent some of the time.

So I propose to change the structure of decision making. James Harris, like it or not, is gone. It's unlikely that Wayne Weaver will move into the 2009 offseason without a major change. Jack Del Rio received an awfully big extension, Gene Smith a promotion, therefore the odd man out is more than likely Harris. If Weaver wants to fix the problem, two actions are required. Replace Harris with a top shelf GM, regardless of the cost and give him final authority on personnel.