[Edit, Before I become Mr.Negativity, Joe Zelenka is a finalist for the NFL SuperAd, you can vote as many times as you want and let's get a Jaguar in the Super Bowl somehow. Click on the link to vote-John]

17-0. That was the score of the 4th quarter. The Jaguars took a 10 point lead into the 4th quarter and promptly fell apart. Pittsburgh, Tennessee, Buffalo, Cleveland, same song and dance as before. I'm struggling to put the kind of disappointment I feel into words right now. 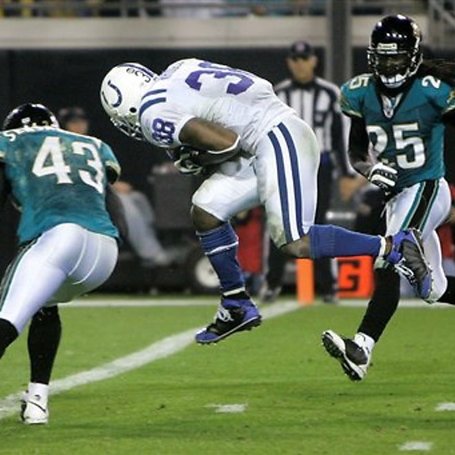 
I'm now of the opinion Jack Del Rio isn't going to get us to the promised land. There, I said it. The amount of 4th quarter collapses we've had this season shows that. I hate to be the sky is falling type, especially after Tkopa's recent post, but I can't help but feel this way. Whether it was the motivation from Richard Collier, wanting to kick the Colts out of the playoffs, whatever, this team failed to get it done when it counted.

You all saw it in your minds on that last drive. Garrard hitting a receiver in the back of the endzone, then taking it in for 2 on the QB draw. Instead we have David taking a sack to end the game and any hope of having a good feeling going into the off season. Hopefully Al Davis fill fall asleep on Draft Day and we'll get to get to jump a spot. 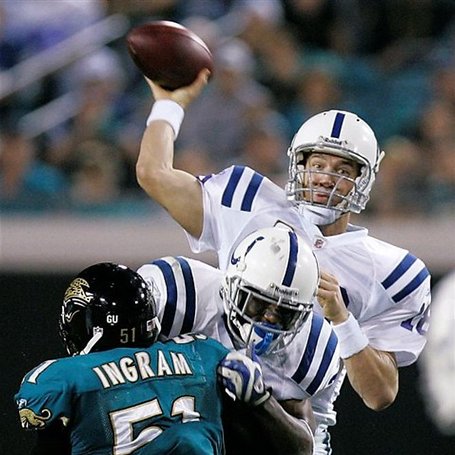 29 of 34 for 364 yards, three touchdowns and a 140.7 passer rating. Peyton Manning's stat line. I don't even think I've had a game this good in Madden. We all know the defense hasn't been up to it's usual standard under Del Rio, but that's ridicolous. How fitting our 2008 season ends, as far as I'm concerned, the same way our 2007 season ended, with no pass rush and a QB at the top of his game picking up apart.

So where does this team go from here? We have a lame duck game against Baltimore next week before the offseason begins. Some predictions

1. Shack Harris will be gone before the Super Bowl

3. Jack Del Rio is going to have a meeting with Wayne Weaver and be told it's all or nothing next year. Either a deep playoff run or he'll be joining Shack.

4. Whoever the new GM is will have full power over personell decisions.

5. Somebody is going to say something to the press and ESPN is going to run with it for a week how "The Jaguars were never in it this season." You don't have a crash and burn season like this without it.

6. Some reporter is going to quote an anonymous source saying the Jags are LA bound.

7. If Tebow comes out, I'm putting the over/under at 7 fanposts from new members asking if we're taking him in the First Round.

A season of such promise, I figured this morning I'd be working the phones on trying to score some playoff tickets and wondering if I should say to hell with it and plop down the cash for Super Bowl tickets. Instead I'll be counting down until Draft Day. 126 days until your Jaguars make their first round selection.