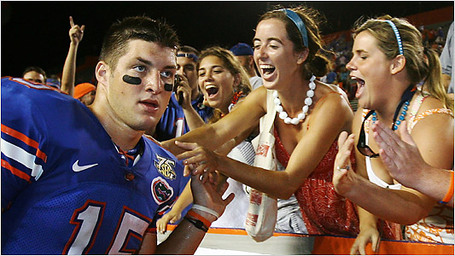 The Nightmare of the 2009 Offseason BEGINS!

The most dreaded part of the 2009 offseason for the Jacksonville Jaguars will be, without a doubt, the speculation around the NFL career of Mr. Tim Tebow. This will be the most nauseating part of the pre-draft period. Personally, I think Tim will elect to stay in school and come out in 2010, but that's without any sort of inside information. I do expect that were Tim to come out in the 2009 draft, he'll be a third round or later pick and will hear from the draft committee that he's better off entering as a fullback or tight end. If he wants to be a serious quarterback, he'll have to wait another season.

But some writers won't let that stop them from terrible speculation. Dan Shanoff, someone I respect as a pioneer in sports fandom and blogging, has frankly fallen from the deep end:

So: Who's going to construct the biggest draft reach of the decade and pick Tim Tebow -- and not just pick him in the first round, but pick Tebow in the Top 10? Prediction: Jacksonville.

You think I'm crazy. You read the draft previews that Tebow is a 2nd-round pick, at best. I'm just saying that if he comes out -- still an "if" -- he will rise into the first round.

(And if the Jags don't take him -- they would use the Jacksonville native for marketing as much as they would for grooming him to replace David Garrard in 3 years -- the Pats will. Oh yes.)

b. Players from the University of Florida help the Jaguars sell tickets

Savy fans will instantly reject the premise that the Jaguars need "help" in selling tickets. Even smarter fans reject the idea that one player will radically change ticket buying in the Jagaurs favor. While I respect Tim's athletic ability, no team in their right mind would spend the 8th overall pick on a quarterback project to develop for "3 years" behind a quarterback they just invested 60 million dollars into. Three year projects have a name, they're called "second day picks". Mike Walker is a project player, sure he might have had 1st round talent, but due to injury, he's a second day selection.

Tim Tebow is the same sort of situation, he's simply not NFL ready. Top Ten picks, without exception, must produce in their first two or three seasons, they don't sit on the bench behind a player for three years. Especially considering the risk in investment in a top ten quarterback pick that has at best a 50-50 shot to work out. How many people are going to buy tickets in 2009 ONLY to see Tim Tebow sit on the bench or hold a clipboard?

Will Wayne Weaver sink 40 million dollars to draft Tebow as a three year project with questionalble odds to be a productive quarterback? Will the Jaguars put over 100 million dollars into one position that puts one player on the field at a time? It's a rediculous proposition. Unless Tebow is ready NOW, he's not a first round pick.

Now, I think that Dan Shanoff would respond with an argument about how the Jaguars or whichever NFL team would have to "use Tebow in the right way", WildCat, etc, etc, but that's also a big gamble. Do the Jaguars shoehorn their offense into a system for Tim Tebow rather than bring Tebow into an NFL offense? I'm all about doing a little experementiation, but is there any serious consideration of an NFL offense that goes nearly completely shotgun passes and runs, especially one that (tries to) pride itself on power running?

Tim Tebow has the mindset to do well in the NFL, that's for sure. He's a positive of a character you can find. He's also got unreasonably high expectations and thrives in an offensive system that last produced an NFL quarterback named Alex Smith. I'm not saying he's going to fail, I'm merely arguing that he won't be a first or second round pick and that he won't be drafted by the Jaguars to sell tickets.

Tim Tebow will not block for Garrard, he won't rush the quarterback, he won't intercept a deep pass, and he won't stuff a run. Therefore he won't be drafted in the first round by the Jaguars, it's as simple as that. Frankly, they don't have the offensive linemen in place to protect Tebow long enough so he can do his thing.