Share All sharing options for: Perspectives on a Lost Season: Richard Collier Speaks 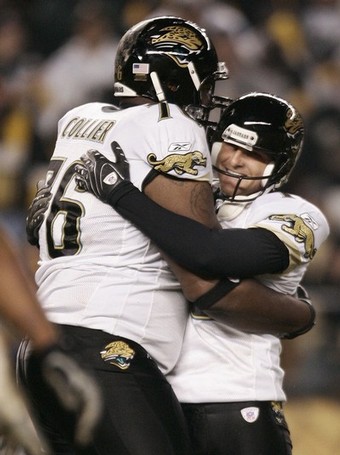 Perspectives on a Lost Season:

This season, without a doubt, is the strangest one I've ever followed.  2000 was a surprise, sure, and the years of salary cap hell were difficult, but nothing compares to how this season has played out.  From picking up Jerry Porter and Drayton Florence in free agency to the absolute shock on draft day, the moment the season "started", things have gone drastically different than expected. (My friends at Stampede Blue and Mile High Report can attest to the draft shock, I nearly missed the Jaguars move-up do to an unfortunate bathroom break).

Nothing that happened at the combine, the draft, training camp or preseason could compare to the tragic events of September 2nd.  Up-and-coming left tackle Richard Collier was shot 14 times, just as the season began it's downward spiral against the Tennessee Titans.

Richard Collier spoke to the Orlando Sentinel recently in his first interview with the media since the incident.  While we're all spun out over the absolute meltdown the Jaguars gave us on Monday Night Football, Richard's words offer a bit of perspective, something that I certainly appreciate as I begin to break down some tape from the game.

Words to Live By:

"Everything happens for a reason," Collier said. "I don't know my purpose in life yet, but I just know that this didn't happen for no reason."

I'm awed by his wisdom.  Some people shut down after tragedy, some give up, others find inspiration and continue to grow.  Richard, clearly, chose the latter.  Richard is also passing along his approach to life to his nephews:

"All three of them took it hard," Collier said about telling his nephews about his condition. "Early on I talked to [the youngest nephew, Jaylon,] I was like,  'Be strong, I’m not at home right now so everybody needs to be on the money. A tight ship should be ran while I’m gone.' That’s how I run my house with them. Make sure they have no trouble in school, everybody’s grades are good. ... Growing up, other than my dad, I just never had an athlete to show me. My dad, he played ball, but my dad was a hard worker. There were times when he couldn’t come to a game or show me a move. I’m not even talking about just sports. I look at them as closer to my nephews. I love them so much, I just want to see them succeed in life as young men."

I'm stunned by the emotional maturity and perspective.  We're talking about someone who had his life completely turned upside down.  Football, you'd imagine, is an afterthought to Richard right now.  You'd be wrong.

"It used to be hard for me to watch the Jags," Collier said. "I remember sitting here in the hospital and just crying. Being around those guys, you have a bond with them. Without it you're like man, it's gone."

The first Jaguars game he watched this season was Jacksonville's win over Indianapolis on Sept. 21. He planned to watch his team "beat up on Houston" Monday night. He still considers that his team.

Jack Del Rio brings him lunch, Clint Ingram and Tutan Reyes visit regularly, and I imagine that the front office will do the right thing and pay him for this season despite the "off the field" nature of his situation.  He's an inspiring young man, someone who should be remembered for his relentless pursuit of his dream.  Richard wasn't a big school prospect, he played at Valdosta State and was an undrafted free agent, that he was in a battle with Khalif Barnes to start at the most premium position in football is remarkable, though not nearly as much as his recovery from the shooting.

I'm going to be back in a few hours with more serious look at the 2008 Jaguars.  Just do me a favor, as we struggle to deal with a season gone horribly awry, let's keep a little bit of perspective.  When we're cheering for the team to win on Sunday, no matter how bad it looks on the field, cheer for Big Rich too.