The Season in Review Part I Delusion over Reality

Share All sharing options for: The Season in Review Part I Delusion over Reality

Well this is because Meester and Williams and Manuwai were hurt. Wrong! In this series discussed above we had the A-team in, all of the offensive linemen were playing, no one was hurt. This series represents the Jaguars 2008 pre-season with David Garrard under center.

Well Terry, you can't count the pre-season, they aren't playing for real. I can't? You tell me how these statistics differed from the actual season. We watched that pre-season and watched these results and thought we were looking at a Super Bowl contending team. The truth is we were seeing a 5-11 team right from the start. We never opened our eyes. We chose delusion over reality. Miami and Atlanta showed it from the start, so did the Giants. We never showed anything in pre-season because we had nothing to show. We watched hope over reality.

This is how deep the delusion went.

Quarterback David Garrard has shown no decline in his performance since signing the most lucrative contract in team history during the offseason.

Cornerback Drayton Florence has been everything the team thought he was when they signed him to an expensive free-agent contract. His performance in training camp confirmed Brian Williams' move to strong safety, which could give the Jaguars one of the best defensive backfields in the league.

Was Vic right on August 14th? No, he bought completely in to the delusion and so had Jack Del Rio. Our head coach thought he had a Super Bowl contender right up to week 7 of the 2008 season. He was so far off the reservation; I don't know where he is today. All I know is he is muttering and stammering in post game interviews without a clue. Shack Harris may have been part of the problem, but if Jack doesn't wake up, he will not work again in the NFL. If I were Wayne Weaver I would have choked him when he said "I can rest my head comfortably on the pillow knowing I did everything I could". That was just before the humiliation of the Houston Monday Night game. Earth to Jack, you are the head coach, not just the person who assigns blame. Jack, you better show me you know how to coach. Right now I don't believe it..

Super Bowl delusions are not new. In 1994, the Cleveland Browns went 11-5. Peter King from Sports Illustrated picked them for the 1995 Super Bowl. General Manager Mike Lombardi and Head Coach Bill Belichick convinced owner Art Modell he was one player away, a break-away wide receiver. They signed Andre Rison for a $5million bonus, $17 million contact. In total they paid out $20 million in signing bonuses for 1995 season. (Sound familiar?) In week 7, the newly formed Jacksonville Jaguars drove a nail in the coffin of the Cleveland Browns Super Bowl hopes and actually forced Art Modell to sign the paperwork with the City of Baltimore to move the team. They finished 5-11 (sound familiar?) Art Modell went broke in Cleveland chasing the Super Bowl delusion. Delusional bubbles are like that, they burst with a big impact. Hello Wayne, we like having the team here in Jacksonville.  Pay for performance, wake up! 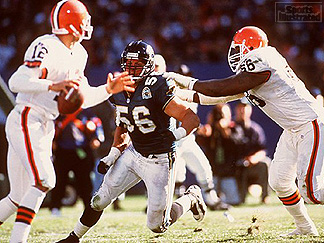 Wayne Weaver is different than you and I. He actually risks his entire fortune on this team. In considering a ham and egg breakfast, the chicken is involved, the pig is engaged. Wayne Weaver is engaged. I think Jack Del Rio played this to his advantage. I am not convinced Jack Del Rio is the man to lead this team. I am only sure of one thing; I am a Jaguar fan and promise to stay with the team through thick and thin. But no more delusions.  Show me the results.  I'll be there to watch, but don't ask me to believe without showing it.