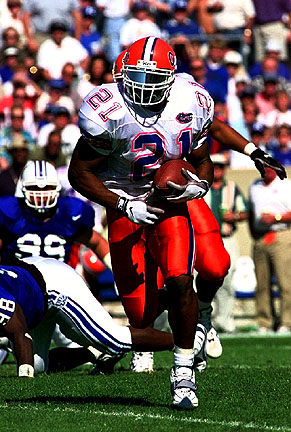 Fred Taylor in his College Days

Despite the many issues the Jaguars will be addressing once the season ends, I'm most interested in how the team handles Fred Taylor. Fred, in my opinion, must be allowed to restructure his contract and remain with the team for at least one more season. Unfortunately, this seems unlikely. Pro Football Weekly reported today that a "source" within the Jaguars gives Fred a 5% chance of remaining with the Jaguars.

"The Jaguars know they need to get younger, and keeping Fred around would hurt their progression," a source close to the club said. "The NFL is a young man’s game." The source put Taylor’s chances of returning at five percent, a notion Taylor himself tacitly acknowledged recently when he said he believes the organization will head in a different direction in the offseason.

Can anyone guess who that source is? I can say with 98% certainty that it's Vic Ketchman, who's probably got his fingers on the pulse of the situation. I find it interesting that he'd use his "young man's game" catchphrase while speaking anonymously. Occam's Razor tells me that it's probably a poor choice of words, but the political operative in me says that Vic is trying to manage expectations and prepare the fanbase for the what may happen in a few months..

So there's that. Of all the offseason moves that the Jaguars will make, this is one that will sting. Great players leave the team their iconic team, that's inevitable, but this will only be the team's third "legendary" player to leave (Boseli, and Brunell). He's a guy who's been our star, even when the rest of the NFL media forgot about him. He's a guy who can put his name in the Ring of Honor about 2 minutes after he leaves the buidling. I think he's got one more good season in him and should the Jaguars fix their line, he'll return to the fantastic 1-2 punch with Jones-Drew.

But if the team elects to clear out the team and get young fast, Fred's gone.