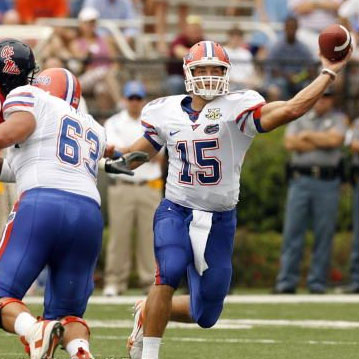 Tim Tebow will not be a Jacksonville Jaguar or join any other team in 2009. He has, thankfully, decided to stay with the Florida Gators and delay my everpresent nightmare of Tebow pre-draft hysteria for one more year.  The idea of dealing with Tebow Hype for the next many months as we dealt with the myrad issues around the Jaguars would have been simply too much to bear.

This is not to say that Tebow would have been a terrible choice, were the Jaguars to pick him up in the 4th or 5th round and then developed him slowly over several seasons, then there might have been some merit.  This whole concept of drafting a rookie in order to fill seats is a complete and total fallacy.  Were the Jaguars to have drafted him on the second day and the "fans" who bought TebowTickets had to see their boy sitting on the sidelines holding a clipboard would have been intolerable.  Or the chants of Te-Bow every time Garrard makes a bad pass.  These are things that literally keep me up at night.

He might still be a good NFL quarterback.  He'll need work on footwork, throwing motion, progressions, and the whole idea of taking snaps under center.  The only time Tebow was under center was in the victory formation, something that he'll have to learn about once he gets to the NFL.   He'll need a patient team that can invest the time and energy to build gradually over time, for Tebow is no Matt Ryan or Joe Flacco.

Another year in school was a wise choice, maybe Urban will add some non-shotgun formations as a payback for the leadership that Tebow's given to the Gators.

So, on behalf of myself, good luck next year Tim, hopefully your NFL career stays out of sight and mind until the Jaguars wrap up a lot of playoff wins in January 2010.