Tony Dungy to Retire: A Good One Hangs up the Clipboard

Share All sharing options for: Tony Dungy to Retire: A Good One Hangs up the Clipboard 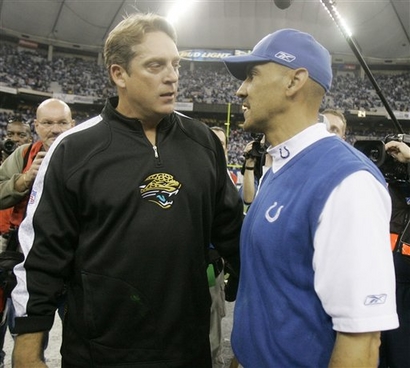 Here's to a happy retirement!

The notoriously positive head coach of the Indianapolis Colts will step down today after one of the most remarkable careers in NFL history.  He is, without a doubt, a Hall of Fan worthy coach with his legacy of turning around two franchises, winning two Super Bowls (Tampa in 2002 is Tony's trophy, whether he was there or not), and creating an atmosphere where winning and being positive was king.  There was never any drama in a Dungy coached team, just winning.

Now, I'll be honest, I've disagreed with much of Dungy's off the field agenda.  I get very uncomfortable when head coaches get involved in the political sphere, especially when it comes to divisive issues.  Also, speaking frankly, I'll breathe a little easier knowing that the Jaguars path through the AFC South will be without one of the best coaches ever on the opposing sideline twice a season.  But you won't see me dancing with glee, not just yet.

Tony Dungy was important to the NFL because he served as the Anti-Belichick.  He was the composed, honest, straight-forward and respecting leader of a premiere franchise.  He never turned a cold-shoulder to any coaches or offered lame handshakes, no you get the feeling from Dungy that when he told opposing teams "good game", he meant it.  The NFL is a worse today for his loss.

The Jacksonville Jaguars know Tony well, it won't be the same to see the Colts without him on the sideline.  I know that there are some who might not look so kindly on his career, for today let's keep those comments to ourselves.  Visit our friends at Stampede Blue and Buc'em for more on the career of Tony Dungy.