It is Christmas season, 1948 in South Carolina. The Matthews' home has reason to celebrate. Matty Mathews' Citadel Boxing team has just won the Southeastern Conference boxing championship. Matty has been the coach at Citadel for 18 years. He would go on to coach there for a total of 47 years and be inducted into the Citadel Hall of Fame. He was a loved coach and was recognized for the advice and guidance he gave his young men. His son Edward (but everyone calls him Clay) is home from Georgia Tech soon to graduate. Clay played tackle on the football team, was a Southeastern Conference wrestling champion, a Golden Gloves boxing champion and a member of the swim team. But the big reason to celebrate that Christmas hadn't happened yet, not until the phone rang.

"Clay, it's for you" his father calls. "Yes Sir, thank you, I would be honored" they hear him say to the caller. "Who was it" they all want to know. "That was Clark Shaughnessy, coach of the Los Angeles Rams; I've just been drafted to play in the NFL" Clay says stunned. With the 247th pick of the draft (out of 251 players selected) the Los Angeles Rams selected Clay Matthews from Georgia Tech. His father looks at him with pride and reminds him of his often told advice; "No matter that you are the last player selected, don't ever quit, and always give them everything you have". Clay Matthews played in the NFL for six years as Offensive Line Tackle, Defensive Tackle and Defensive End, and that was the start of arguably the greatest NFL family of all time. 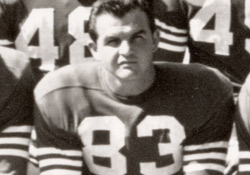 Like his Father, Clay had mostly boys, one daughter and four boys. The twins, Raymond and Bradley were born developmentally disabled. Of course that didn't dismiss them from winning as they became Special Olympic champions. Clay raised them himself after wife Daisy died in 1984. As Clay Matthews so often says, "I'm a lucky man, it's all about family". Clay and Daisy's' two other boys were oldest son Clay and younger brother Bruce.

Bruce Matthews.
Bruce Matthews went to USC and became an All American, winner of the top Offensive lineman award for the Pac 10 Conference and was drafted 9th overall by the Houston Oilers in 1983. Bruce Matthews played in a record 297 football games never missing a single game due to injury. Bruce played 19 seasons, was elected to 14 Pro Bowls and is now in the Pro Football Hall of Fame. In any "greatest teams of all time" Bruce Matthews is playing center. As his father explained:

"I had a set of rules I could use on all of my kids. I told all of them, ‘You can do whatever you want to. You can go play any sport you want to. You can go out and try anything you want. But there's only two rules. One of them is, I don't care if you're the last string and sit on the bench all the time and you're the worst guy out there, you can't quit. No. 2, if I ever come see you play or practice and you're not giving it 120 percent of what you've got, I'm going to yank you out of there myself.' "

Clay Matthews.
Bruce's older brother Clay Matthews also went to USC and also was an All American. Clay was drafted 12th overall by the Cleveland Browns in 1978 and played in 278 games over 19 seasons, but only four pro bowl appearances. He did get hurt, fracturing his ankle in 1982 and backup Bill Cower had to play his position. He worked hard through that injury and in 1984 recorded 126 tackles, 12 sacks and three forced fumbles. His four pro bowl appearances came after that injury.

Clay Matthews followed in his grandfathers' footsteps and is coaching High School football in California. He coached his oldest son, Clay.

So if you are keeping score, the Matthews family has recorded 44 NFL seasons, 18 Pro Bowls and one Hall of Fame, but they aren't done yet.

Like his father, the youngest Clay Matthews wanted to play football for USC. The problem was he weighed maybe 205 and wasn't big enough to play defense for one of the top college program. His father advised him to try a smaller school but Clay wouldn't hear of it. He walked on to Pete Carroll's practice field and began working.

"I thought it was intriguing," USC coach Pete Carroll says of Matthews' arrival. "He had that big family background here. So I thought, 'OK, is there some magic in here somehow?' And I didn't see it. He looked like just a good, hardworking kid who was undersized, just not physically ready to match up."

So what if you really want to be like your dad and play football at USC, what do you do? If you are a Matthews, you hit the weight room hard. Clay Matthews gained 40 lbs of muscle and was voted the workout champion by his teammates. By the way, his teammates he outworked were Brian Cushing and Rey Maualuga.

Clay Matthews earned a scholarship in 2006 and midway into the 2008 season he was first in sacks, second in tackles for a loss, fifth in tackles and first in fumble recoveries.  He also carries a 3.0 GPA. That is a lot of hard work.

Here is a Clay Matthews interview

So what does Pete Carroll say about "walk on" Clay Matthews now?

Matthews is a versatile linebacker who can play all three LB positions. He has great size and quickness and can impact a game in many ways. He’s an instinctive player who has great range and anticipation skills. He’s disruptive off the edge and makes a lot of plays in the backfield. He’s an outstanding blitzer and is aggressive at the point of attack. He’s an opportunistic defender who’s always around the ball. - Chris Steuber, Scout.com

While teammates Ray Maualuga and Brian Cushing certainly earned more attention throughout their careers, it is former walk-on Clay Matthews Jr who some scouts feel could be the best of the bunch

So the Jacksonville Jaguars want football players, guys that will inspire others and be unselfish, guys that just play the game for fun and to win. If Clay Matthews takes the field as a Jaguar and looks up in the stands and sees his grandfather Clay, his uncle Bruce and his father Clay, do you think Jack Del Rio will have to motivate him to excel? Do you see any "attitude problem" here? I can see him in his first year on special teams busting the play and creating opportunities. I see a lot of upside.

The evaluations of him are just now showing up. His rise up the draft boards has been so fast, many of the scouting sites didn't have copy on him.

Clay Matthews is the kind of guy the Jaguars are looking for, pure football, self motivated, and clean.  If the Jaguars are serious about getting to the quarterback, the current Defensive Line isn't the total answer.  However, you put Quentin Groves and Clay Matthews on the same side and watch the backfield havock they would cause.