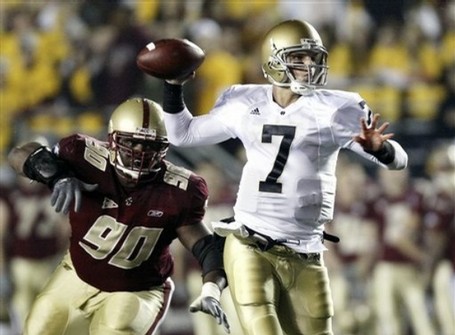 Ask and you shall receive. By overwhelming popular vote, Defensive Tackle B.J. Raji will be my first Scouting Report for the 2009 offseason. Raji, like most draft picks, is somewhat of an unknown quantity, at least as far as the NFL goes. He's clearly a talented player and did an outstanding job at the Seinor Bowl. He made all the top offensive guards and centers, including Alex Mack and Max Unger look foolish while pass protecting.

The Jacksonville Jaguars are in a unique position of having needs at just about every position on the defensive line. It's not even questionable as to whether the Jaguars would select a defensive end with the 8th overall pick, if Everette Brown was the highest rated player on the Jaguars board when they were on the clock and could not trade down, I'd hope they stuck to their board and made the pick. Better the Jaguars have too many young guns at end than let the Texans find a pass-rush partner for Mario Williams.

The Jaguars have a significant need at defensive tackle. Rob Meier was not an adequate replacement for Marcus Stroud while Tony McDaniel found himself on injured reserve with a broken wrist. Derek Landri was good but not great, while John Henderson enjoyed the double and triple coverage that losing Stroud earned him. There was very little push up the middle for the Jaguars defense and the imposing force in middle of the line was simply nonexistent. Finding a yin to Henderson's enormous yang is critical for the Jaguars as pressure from the front four opens up the defensive playbook. If the Jaguars can get pressure with just the four down linemen, everything else starts to work, especially in the secondary.

So who is B.J. Raji? He's an enormous (6-1, 334 lbs) defensive tackle who demands two blockers on each and every snap. The obvious upside to Raji is that when pared with John Henderson, you've got terrible decisions for the offensive linemen as to who gets the double team and who gets a mere chip block from a full back or running back. The idea of these two guys in the middle should send visions of sacks in the heads of Derrick Harvey, Quentin Groves, and Reggie Hayward. Raji will excel as a run stuffer, something that the Jaguars can use to improve their pass defense in that putting Raji in the middle allows for a linebacker to be switched out for a cornerback without too much fear of giving up a big run. Against the pass-wacky teams of the AFC, that would be a pretty nice benefit. Of course, there is another wonderful way for the Jaguars to get a tremendous amount of value out of B.J. without him ever taking the field, but I'll get into that at the end.

His 2008 season with Boston College featured 42 tackles, 22 solo and seven sacks on a defense that was 7th in the nation against the run and 5th overall. 12 of his tackles were for a loss, 50% of the teams total.

There's another number that deserves consideration in selecting Raji: Zero. As in the number of games he played in 2007. He was redshirted due to issues with "satisfactory progress", due to his not registering for enough classes in a given semester. It was not, as some are reporting, due to grades, but rather he needed three courses rather than two and was forced to miss the season. While it might be just a simple mistake, it is an error that is Raji's responsiblity to prevent. Another number to remember: One Game. As in how long he was suspended for punching an opponent during the Clemson game in 2006. Will these two black marks fit in with Gene Smith:

"I would like to think, moving forward, that there will be a stronger emphasis on it," Smith said of targeting high-character prospects. "I would never recommend a player I wouldn’t want to coach or whose locker I wouldn’t want next to mine. I want people who, when you have adversity, will respond in a positive way. I want people in this community to know that character does matter. There are expectations that have to be met if you want to be part of this organization,"

Cincinnati Bengals defensive Tackle John-Thornton interviewed B.J. at the Senior Bowl. This is unique because Thornton is a free agent in March and may have interviewed his replacement

JT: Are you going to do everything at the combine?

BJ: That's what I'm planning on. Unless something happens during training. But I'm definitely planning on it. Coaches at the Senior Bowl told me I needed to work out at the Combine.

JT: Where did the Bengals have you playing during the Senior Bowl? What position?
BJ: They had me playing nose guard. I played there and then we rotated some.
JT: They didn't have you playing any three technique?
BJ: Not much. But when I started dominating inside, they put me at the 3 tech during practice.
JT: What is your weight?
BJ: 334 right now. That's a little heavy for me. I was 323 in college. I want to get down to 323 for the combine.
JT: What did the NFL coaches say about that?
BJ: They gave me a limit that I should be at. I'm working on it. Going to get in good shape for combine.
JT: Say you are on the center and you know it's a pass, what move will you use if you know the center has you one on one?
BJ: I like to use a club rip. Work the outside of the center. If he over sets me, cross his face.
JT: What about if you are working against the guard and you are one on one?
BJ: Oh, I like the double slap down on the guards hands. They hate that.

Scouting Report: From the Experts

Mocking the Draft: Raji is a powerful, run-stuffing force in the middle of the defensive line. He has the frame to play the nose in a 3-4, but mainly played in the 4-3. He is best, though, right over the center. Routinely takes up two blockers. Raji has the strength to collapse the pocket, forcing quarterbacks to roll out.[see more...]

NFL Draft Scout: Flashes rare burst off the snap for a man his size and can penetrate into the backfield and disrupt the play without necessarily making the tackle. ... Good strength and mass at the point of attack to create a pile. ... Good short-area lateral quickness. ... Experienced. Missed the 2007 season due to academics, but leaves BC with 38 career starts. ... Locates the ball quickly and works to make the play. ... At his best lining up at the nose, though he flashes the initial burst off the snap to be effective as the under-tackle in the 4-3 alignment.[see more...]

Scott Wright's NFL Draft Countdown: Outstanding mass and bulk...Excellent strength...Stout at the point of attack...Can fill two gaps...Able to occupy multiple blockers...Tough, powerful and nasty...A beast against the run...Can really collapse the pocket...Able to penetrate and make plays in the backfield. [see more...]

Walter Football: Elite size, bulk, and strength to play defensive tackle in the NFL and hold up against the bigger offensive linemen ... Complete wall in the middle of the defensive line against the run ... Somewhat athletic with fluid hips ... End-to-end defender who can make plays outside of the phone booth ... Best pass rush move is the bull rush. [see more...]

Mocking the Draft: Inconsistent in his effort. Will take plays off. There are big concerns about Raji's stamina as he'll often have to come out of the game. Weight has fluctuated during his career. Will struggle at times to shed blocks. Can't sustain his quickness more than a step or two. Lacks pass rush moves. Underperformed, to an extent, until his senior season.[see more...]

NFL Draft Scout: Marginal height for the position. ... Only adequate to shed blocks due to his short arms and lack of sustained quickness. ... Rare quickness in confined space, but lacks the speed to sustain and struggles to make an impact outside of the guard box. ... Flashes the burst off the snap for the three-technique (under tackle in the 4-3 alignment), but is only a marginal pass rusher. ... Relies on his initial burst off the snap and an occasional spin move to pressure. ... Reliable tackler, but lacks the balance and lateral quickness to break down and make the tackle in space.[see more...]

Scott Wright's NFL Draft Countdown: Conditioning and stamina have been problems...Is shorter than you'd prefer...Maturity and commitment have been questioned...Doesn't always play with proper leverage...Inconsistent and his motor tends to run hot and cold...Is not an elite pass rusher [see more...]

Walter Football: Outside of the bull rush, Raji does not have much of a pass rush repertoire ... Does not consistently dominate as much as you want him to as a pass rusher. [see more...]

Why should he be on the Jacksonville Jaguars?

Because he's a wonderful compliment to John Henderson and would allow for the Jaguars defense to return to the era of imposing physical play with the front four and open up the entire defense to an improved season. B.J. Raji is somewhat of a magic bullet for the defense, if he's as good of a player as he could be in the NFL. Forcing teams to pick between Henderson and Raji for the double-team opens up the defensive ends for serious pressure, something that the Jaguars defense failed to do in 2008. Pressure, as we know, makes cornerbacks look better. If the choice is between Raji and say Malcom Jenkins at Corner, I say go for the big guy up front.

Now, frankly speaking, defensive tackle is not our most critical area of need, and the Jaguars should consider moving backwards if Raji is there and we don't have an offensive tackle available. This is where Raji becomes very important, as the Denver Broncos and Green Bay Packers are both switching to 3-4 defenses and will need to find a nose tackle. Raji is by far the best candidate for both teams to anchor their defenses and the Jaguars could get their extra draft picks by switching with either team. Picking at 9 or 12 isn't vastly better than 8, but anything that nets the Jaguars draft picks is fine by me.

These are my thoughts on Raji, what do you think?