Vic Ketchman calls out Peyton Manning: Prepare for the Worst

Share All sharing options for: Vic Ketchman calls out Peyton Manning: Prepare for the Worst 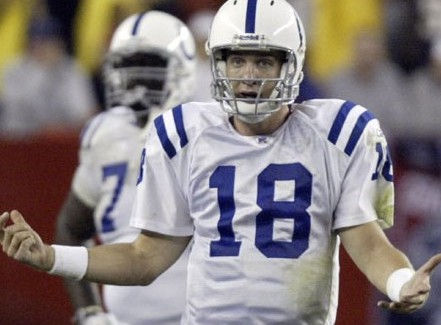 In what will only inspire all sorts of intelligent and sophisticated responses from our friends at Stampede Blue, Jaguars.com Senior Editor elected to eviscerate Peyton Manning for his performance against the Chargers on Saturday. Vic, it seems, likes to raise my blood pressure to unbearably high levels as I await the reaction to his commentary. Manning, like most great players, inspires passionate responses from his critics and his supporters. This passion tends to degrade into name calling, straw men arguments, and ad hominem insults. It also leads to the complete disregarding of legitimate points based on emotion.

What Vic said, for better or for worse, was spot on, though as I will argue below, somewhat misplaced:

Manning did his job. Defense not only wins championships, it loses them.
Vic: Manning did his job? What is it with you Peyton Manning apologists? He was nearly intercepted four times and three of those should’ve been intercepted and returned for touchdowns. The only play he made in the second half was catching the Chargers off guard and lobbing a touchdown pass to an uncovered receiver. In his last four possessions, with the game on the line and the Colts only needing one more score to clinch the win, Manning managed a total of 20 plays for 38 net yards. Hey, that’s crunch time, baby. A day after he wins the league MVP, he gags with the game on the line and does his usual one-and-done routine. When are you people gonna get off your knees? The guy is 7-8 in career postseason games and six times he’s lost in the first playoff game of that year’s postseason; three times in the last four years. Manning did not do his job. His job is to win. His job is to get it done at crunch time.

Sadly, Vic fell into the name-calling and insulting approach but considering the kind of stuff he gets in his mailbox, it's not surprising. If you look at the facts, however, there's something to be concerned about when it comes to the Colts and the post-season. One-and-Done is a completely unacceptable outcome in the playoffs if you're the Indianapolis Colts. They have at least one Hall of Famer at Wide Receiver, the best Defensive End tandem in the league, the best freak of nature at Safety in Bob Sanders, the best Center, and a three time league MVP in Peyton Manning. Yet 40% of the time the Colts leave the playoffs after the first game.
When the Colts lose in the playoffs, there emerges two schools of thought: Manning is a Choker vs. Manning did his best with a poor supporting cast, usually the defense. Vic elected to take the first approach, pointing the finger at Manning and his post-season record and justifying his take with the fact that as one of the highest paid players at his position, it is his job to win the game no matter how bad the running game or how porous the run defense. If you reject Vic's point of view, as most Colts fans will, tell me who is at fault for the 40% of the games lost in the first round? Is it Tony Dungy? Is it Bill Polian? Is it the strength and conditioning coaches? Who falls on the blade for a losing post-season record and having one of the most talented teams in NFL history consistantly miss out on the big dance? I've only heard reasons why Manning is better than his critics, but I'd love to hear someone explain how any season where the Colts are not in the Super Bowl with their stacked roster is anything less than a complete and total failure?
What went wrong and who is to blame? Were I to guess, I'd bet Tony Dungy retires and the revisionist history about the 2008 Colts will be that his heart wasn't in it and a new coach-in-waiting in Jim Caldwell should right the ship. Blame the coach that's held the office for too long with an underpeforming team, a classic approach to tossing the season down the memory hole. It works to make everyone feel warm and fuzzy, but will it address the issue?
In a way, Manning supporters who assume he can do no wrong, like I assume all those who attack Vic for his statement will do, the implicitly blame someone else, like Tony Dungy, for the outcome. It will be interesting to see the debates in the Colts fan community about what must be done in the offseason. In the spirit of full disclosure and before anyone accuses me of being a Manning "hater', I thought he deserved the MVP award. So there.

(By the way, the first person who calls me out for criticizing Manning by referencing the "number of rings" he has compared to Jacksonville, the Jaguars record, or says the Colts "own" the Jaguars will find themselves on my bad side)