Is Pat Tillman a Hall of Famer?

Share All sharing options for: Is Pat Tillman a Hall of Famer? 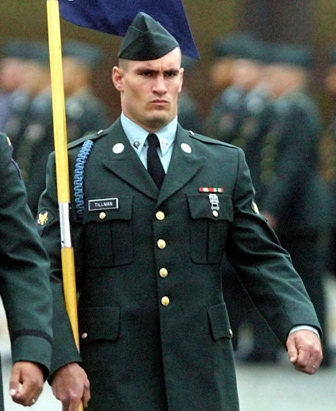 Once again, I found myself deciding to click on an article for my nominee of 2008's First to Worst in Sportswriting award, Peter King. Normally I just shake my head at the state of both his column, as well as Stewart Mandel's. However, this time I think it's worth a rebuttal. In his Tuesday Morning Quarterback, he was asked if Pat Tillman was hall of fame worthy.

Cris said the same thing last year on our HBO show, and I respect his opinion. But I disagree. The Pro Football Hall of Fame mandates that players be judged on what they do between the white lines and nothing else. Tillman was a good NFL player, not a great one. What if, for example, Jon Kitna enters politics after his NFL career, becomes a great American statesman, ascends to Secretary of State and brokers a truce between the Israelis and Hamas? Should we then elect Kitna to the Hall of Fame?

Sorry Peter, we have a term for that, and it's called a Straw man. We're not talking about politics or running for office. What Pat Tillman did was so far gone from the example you just gave, it's absurd.

Pat Tillman dropped a multi-million dollar offer from the Arizona Cardinals to join the US military to fight what he believed in. In an era where we may honestly see players like Terrell Owens end up in the Hall of Fame, I say THAT sends the wrong kind of message.

As someone who belongs to a family who has had a member fight in every war this country has been involved in since the Mexican War I can't help but feel you are doing a disservice to the soldiers on the battlefield.

In an era where players make more money in a season than the average fan in the stands makes in 15 years, Tillman's actions were the definition of courage, patriotism, and humility.

My signature, "I smoke, if that bothers you, take a look around the world we live in and shut up" by Bill Hicks, explains alot on my philosophy on life. I'm not sure about you guys, but I find the fact that this country spends more time discussing pointless issues rather than solving real problems or finding truly valid things to hold dear, upsets me.

While I respect every ounce of sweat every player has given to dedicating their bodies to play at the NFL level, Pat Tillman gave something much more. He gave his life for this country. He showed the kind of resolve, dedication, and committment we often only give lip-service too.

Pat Tillman deserves a bust in Canton, Ohio. In fact, he deserves to be the first one on display.