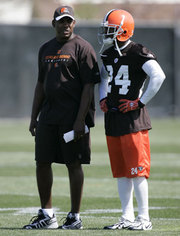 Mel Tucker: Because the Browns are known for solid defense

Adam Schefter of NFL.com reports that the Jaguars have made their first interview for the vacancy at Defensive Coordinator. The team interviewed Cleveland Browns coordinator Mel Tucker:

Tucker became defensive coordinator of the Browns at the start of 2008 after spending three seasons coaching their defensive backs. Tucker was also considered to be the head coach of the Browns after the firing of Romeo Crennel, though Chris at Dawgs by Nature thinks that was a "token" gesture:

Without the intention of coming off as disrespectful, Tucker is likely filling Lerner's requirement of having to interview at least one minority candidate, per league rules. Sorry Tucker -- odds are that's the only reason you're receiving an interview.

The interviewing of Tucker reveals a few things:

1. Gregg Williams is gone. He's seeking other options/not coming back/Del Rio did not want him.

2. Jack Del Rio is seeking to take a dominant role in the operation of the defense. Tucker was promoted under the overview of Crennel, who used to be considered a defensive genius. Gregg Williams personified the "independent coordinator", Tucker would be a more submissive choice. I don't know that Del Rio would start calling the defensive plays, but he'll certainly be more involved than he was under Mike Smith and Williams.

3. The Jaguars are staying away from high-profile coaches, at least for now. None of the "top tier" coordinator choices, at least by my standards, are available due to the playoffs. (Sean McDermott, Chuck Cecil, Mike Waufle). With a little luck, the Jaguars will wait on filling the DC position until at least one of these three can be seriously considered. If the Jaguars eschew all three, I'll be horribly disappointed.

The most positive side of hiring Tucker would be his emphasis on the defensive backfield, an area where the Jaguars struggle. His coaching career is entrenched in the secondary:

I'll be doing a bit more research on Tucker to get a better grasp of where his head is at in regards to defensive philosophy. Feel free to debate Tucker our your defensive coach of choice in the comments!