Speculation:The 2010 London Game will be the Washington Redskins vs the Jacksonville Jaguars

Share All sharing options for: Speculation:The 2010 London Game will be the Washington Redskins vs the Jacksonville Jaguars 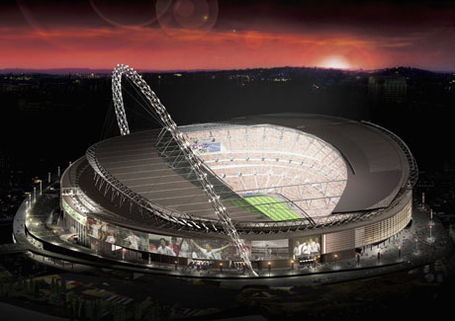 UPDATE: I posted this article back in October, but I wanted to give everyone a second chance to take a look at it, as well as updating various parts that have changed since this was originally written. I still agree with my original premise though that the Jags will be playing the Skins in London next year.  Anything new to the article will be in bold.

I'll give everyone a minute to read the headline once again. Maybe I've had too much time on my hands today, but I've come to this conclusion. I've haven't hid the fact I've supported the idea of the Jaguars playing in the London game next season. It would help with ticket sales by reducing the price of season tickets and generate buzz for the team in the national media that is normally reserved for Brett Favre, if just for a week.

The three "home" teams for the game have all been teams that have had ticket sales issues, and the Jaguars certainly fit that bill. Roger Goodell has made it clear he will do all he can to help make the situation in Jacksonville work, and this is something he could directly influence. It has been hinted that the Jaguars would be looking to playing in the game, and I'm sure the attendance this year will make that a certainty. One less home game means season ticket prices are slashed by $50 and they look that much more appealing. Heck, between the one less home game and a $5.50 reduction of ticket prices, season tickets could sell for $300 next year.

Part of this has already happened. The Jaguars announced several season ticket packages that will start at $300 for the 2010 season. Granted, that was a 10 game package, but we still have time until the London game is announced.

However, the London Game has firmly become the third most important date on the league's calendar, after the Super Bowl and Draft. If the Jaguars are going to play in it, the NFL will have to place them against a team that is going to draw casual fans and the ESPN talking heads with them. When looking for a possible team the Jaguars could face, I looked at the schedule with two criteria in mind #1. A name team that would bring attention to the game and #2. A team that still wouldn't bring enough fans to Jacksonville Municipal Stadium that would have the Jaguars shooting themselves in the foot and moving a sold out home game.

If the NFL keeps their current schedule rotating, the Jaguars' home schedule will be

The Jaguars 2010 Home Schedule will be

1. The Jaguars won't finish last in the AFC South, so that rules out the Browns. If the Jags draw the Steelers, then they definetly won't meet the second criteria. If they draw the Bengals or Ravens, neither team will meet the first.

Ok, so I was totally wrong about the Jaguars not finishing last in the AFC South, though that was written while the Titans were still 0-6 so cut me some slack. Either way, the Browns still don't meet either criteria I set out previous and still think they won't be shipped out with the Jags.

3. The Peyton Manning factor would be tempting, but the Colts have always been a big draw for the Jags so I can't see them moving that game.

As I said, this article was originally written while the Titans we're 0-6. Either way, the Titans don't have the star power necessary, even with Chris Johnson.

5. If the Broncos keep up the pace they're going at, then this could be another intriguing match up for the NFL. While the Broncos aren't a name team, if they're coming off a 13-3 season they could draw well.

Another bad prediction by me, but the Broncos finish still precludes them from being a possible opponent.

Now that we have the Raiders instead of the Chiefs, I think that opens up another possibility. Depsite the circus the Raiders have become, they still manage to be a showcase team for the league for whatever reason. Undead Al is the Wild Card in the equation right now.

7. The two NFC games would be the most interesting for the NFL. First because FOX hasn't televised the game in two years, and second because they still might not help the Jaguars ticket situation. However, I think between the draw of a major team like the Eagles and enough Philly fans making the trip, the game stays in Jacksonville.

8. Which brings me to the Redskins. The Skins certainly spend enough time on ESPN to be well known, and we all know how much FOX loves to hype the NFC East. Some of you might say, but John, the last time the Redskins were in town was one of the last times we sold out the stadium before the tarps. I would like to remind everyone that their were 20,000 people wearing "Gatorskins" shirts are were there only to see Steve Spurrier. The Skins don't have the rabid fanbase as some other teams and I doubt enough fans would make the trip to North Florida.

Therefore, I reason that the London Game will be the Jaguars against the Redskins. It puts a premiere team in the biggest regular season game of the year and allows another team to ease it's ticket woes.