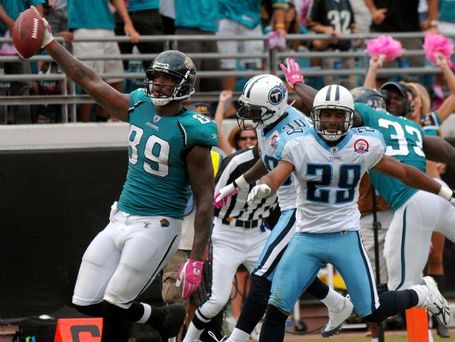 Marcedes Lewis puts the nail in the coffin.

It wasn't anything special. Call play action and drag the tight end across the field with most of the defense up tight to stop the run. The problem is that, for the Jaguars, it isn't something seen very often, much less executed to success.

However, this play was symbolic of how this team should be perceived ongoing. I won't pretend to know what Jack Del Rio and Dirk Koetter were thinking. Maybe they just wanted to run the clock out. Maybe they were looking for that nail in the coffin score. What I do know is that pass play was one of many statements made this weekend.

Statement 1: This coaching staff is smarter than you are

Tennessee had just scored to close the gap, 30-17. With 5:28 left to play, the Titans line up for the onside kick. As Jeff Fisher is inclined to do, the Titans first fake the kick to the left and then pooch it up to the right where Ernest Wilford secures it.

Up to this point the Jaguars had run the ball 23 times, averaging roughly five yards per carry. With only two time-outs remaining the game was all but over. After a two yard loss, followed by a nine yard gain, the Jaguars found themselves with a manageable third and three and the Titans had no time outs left.

With the defense sitting on the run, Dirk Koetter calls for play-action to Rashad Jennings. Rolling to his right David Garrard finds Marcedes Lewis wide open behind the linebackers. He catches the ball at the 20 and one athletic move later Lewis is in the end zone. The Jaguars post the final points of the game. This will not be a run the clock out team.

For those of us who have followed this team closely, I'm sure we can recall any number of games in which this team was sitting on a second and short, only to find themselves punting on fourth down because they couldn't convert. We had an aversion to them passing it because the receivers were bad and the quarterback was getting no protection. That left teams to stack the box and end the drive.

Garrard was playing the best game in years. The Titans secondary, a known weakness coming into the game, had been abused for three and a half quarters. It wasn't an overly aggressive call but it was smart, showing not only an understanding of what your opponent was going to do (remember the Titans came in with the second rated rushing defense), but also a confidence in your players to execute. Garrard failed to convert on in similar situations earlier in the game but Dirk obviously had faith in our quarterback.

Statement 3: This is not a one man team

Going into the game, this was one of the quotes that generated a good deal of interest from the Jaguars and their fans.

"All fantasy football players, I would advise you to bench Maurice Jones-Drew. I’m sure he’s been doing great for you the past three weeks, tremendous numbers, but we’ve got to slow that down this week."

Why shouldn't they feel confident? Apart from Jones-Drew no one on the Jaguar's team had managed to step up as a play-maker, in the run or the pass.

Kudos to Keith and the rest of his defensive teammates. MJD posted one TD rushing but managed only 14 yards rushing (six attempts) and 26 yards receiving (three receptions). What the Titans did not account for is that six players would touch the ball in the run game, allowing the Jaguars to still compile a 4.6 yards per carry average.

On top of that, Mike Sims-Walker led the team in receiving yards for the third week in a row. In those games he totaled 106, 81 and 91 yards respectively. Game planning for the Jaguars may no longer be a one-dimensional approach.

Statement 4: Hey Titans, you might want to consider this a rivalry

Win the next game and the series is tied at seven apiece. Sure it is easy to claim the Colts as your rival as they've been the team to beat since the AFC South was born. Jacksonville has been criticized for a failure to beat their division opponents and Fisher has been mentioned as a better coach than Del Rio. That appears to be changing.

The Titans came in with an attitude in a must win game, preparing to stop the trademark Jaguar rushing attack. With Eben Britton and Eugene Monroe out of the lineup, Tra Thomas and Maurice Williams stepped in to open holes while giving David enough time to find his receivers. Jacksonville became the first team to rush for over 100 yards against Tennessee. The passing game success was expected, but ta king down the 2nd rated rush defense was an accomplishment.

What should instill even greater confidence is that, unlike last year, this team has the capability to rotate their offensive linemen without seeing a drop off in production. Now we just sit back and let the rookies mature. The Tra Thomas acquisition, so far, looks to be a big win.

Statement 6: Jaguars are fast on defense

I went into this game wondering how many big runs Johnson was going to break off. His longest run of the day was 18 yards and a good number of times he benefited from bad tackling. On pass plays, receivers were getting open but few times were there any yards after the catch. The likes of Derek Cox, Justin Durant, Daryl Smith and Reggie Nelson were flying all over the field to negate the big play in both the run and passing game.

One play in particular. It is second and one, mid-way through the second quarter, and C.J. has just busted off a nine yard run down the left sideline. On second down the Titans again send the speedy back to the left in hopes of catching the corner. Nelson darts from his safety spot, between the mix of linemen, to cut down C.J. for no gain. The next play Derek Harvey knocks down a pass intended for Bo Scaife: The Titans punt.

Coming off the home opener against Arizona there was justified concern that this rebuilding effort was going to be more painful than we expected. Jack reminded his players to turn off their ears while the fans were told "we're rebuilding". That was the statement made on that day.

Yesterday was different. Against the Titans the statement was one of further establishing an identity for the present and the future. One that will bring with it victories. Yesterday didn't require anything verbal. We saw it.