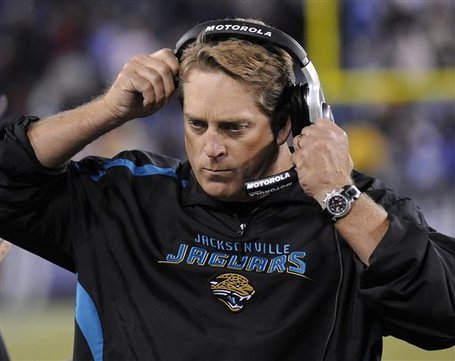 Jacksonville Jaguars head coach Jack Del Rio walks the sideline in the fourth quarter of an NFL football game against the Tennessee Titans in Nashville, Tenn., Sunday, Nov. 1, 2009. The Titans won 30-13 for their first win of the season.

I found myself struggling to decide which was more nauseating: the Vince Young love fest from Gus Johnson and Steve Tasker or the Jaguars. So I tossed a coin.

Let me retract all the good things I wrote about this team after their earlier win over the Tennessee Titans. Everything they said on the field that day has been found to be false. There was nothing new to see in Nashville, just the same old Jaguars after a bye. I guess the "roller coaster of love" mantra would be better to use for the remainder of the season.

I am happy for Vince. I don't want to see anyone succumb to failure apart from their inability to perform on the field. Given the opportunity, he silenced the echoes of bad decisions and a lack of confidence to lead the Titans to their first victory of the season. The team rallied around him and at games end were obviously happy not only to win but that Vince was a part of it.

That being said, let's not pretend that it was Vince Young that won this game. There is nothing gaudy about what he did going 15\18, 125 yards and one TD (114.1 passer rating). His rushing stats aren't even that great with 12 attempts for 30 yards.

However, Young did not throw an INT, though he deserved one, no thanks to Derek Cox. He also did on the ground what Steve McNair once did: He got the yards when the Titans needed it. On two scoring drives Young managed just enough to convert third downs.

Through the air he was just as effective. He managed to get them out of the shadow of their own end zone. He ensured the defense had to respect to pass which eventually would setup the run. He eluded the rush and delivered the ball to open receivers. In summary, Young managed the game in order for the actual talent to control the game.

As for Jacksonville, Garrard awoke the memories of his epic failure three years ago. He threw two interceptions, one which was a badly overthrown ball for Mike Walker which is a touchdown had it been completed, and finished with a quarterback rating of 35.9. Amazingly he actually rates worse than the 53.1 he put up in 2006.

But David is the easy scape goat. He surely didn't play his best game, but part of that thanks goes to the Titans defense and the Jaguars pass protection. Sacked four times and hit more times than a pinata, you couldn't blame him if his focus was on the powder blue jerseys circling his wagon.

Who then is to blame?

The touchdown pass to Nate Washington could have been defended. If you were blind you would've thought the pass was a beautiful throw to the back corner of the end zone. At game's end the announcers were still fawning over the play. It wasn't a fade. The ball was fairly flat but because Nelson was beat off the line and didn't look back for the ball soon enough, Young was able to throw it like a timing route.

The pinnacle of his failures were the two big runs by Chris Johnson. Here he showed why so many are down on his tackling. Someone needs to tell Reggie that quick runners won't be as susceptible to you trying to cut our their legs. I know this was his first start at CB and the demands are different but Reggie's overall play continues to digress.

I won't spend too much time here as we know this group is expected to undulate due to inexperience. They opened holes for MJD. But they just killed David. This group is young and coming off injuries but today was simply unacceptable. No matter how good (or bad) your QB may be, he can't take that type of beating and be expected to focus on the field.

Did I really watch a game in which the Jaguars did not attempt a run until mid-way through the second quarter. And when I did it went to Mike Thomas? That isn't a cut at Mike. The WR end around has worked great for the Jaguars and it netted 7 yards. The problem is that it was the first run of the game and brought the Jaguars offensive total to zero yards. Yes...that is zero as in 0.

Series 2: five passes (even with the aid of two Titans penalties they go "three" and out)

Series 3: one run, two passes (the second pass an INT thanks to a pick by the official)

Koetter's obvious fear of the Titans run defense wound up giving the Titans a 2:1 TOP advantage at game's end. They went into the half only having had the ball for seven minutes and 52 seconds.

I understand David shredded Tennessee in Jacksonville but not getting your best player involved until late in the second quarter is mind boggling. Part of the poor play of the offensive line has to fall on Koetter. If David isn't being given the time to throw you need to make adjustments.

Both long runs by C.J. should never have happened. The failure to tackle was a big reason why the Titans were able to pull away. The inability to make Young uncomfortable ensured the Titans offense would find their groove and feed off their emotions. You simply can't let Tennessee start the game with a seven minute and fourteen second drive.

Allowing your opponent a 53% third down percentage is also a major black eye. Adding insult to injury is that some of those were converted by Young and LenDale White. This was the game in which your best was to be considerably better than their best.

He doesn't get a free pass. He had some gems (a third and twenty to Jarett Dillard) but he missed a wide open Sims-Walker that would have been a TD when they really needed the score. He made some terrible reads (screen to MJD) and held the ball too long (pump and go to Ernest Wilford). Yes David was abused but there were plays to be made and at his cost they have to be made.

What can we say, Jack? You are two and five coming off a bye. Players may make plays but the coach is responsible for preparation. This team was to be 5-3 going into a big game in New York. Yet again the Titans have spoiled any momentum you could bring to this team and the fan base. This isn't the same Titans team that lost 59-0 but they were lead by a pedestrian quarterback who was ripe to to rattled.

This was embarrassing, Jack.