Share All sharing options for: Thinking about Baby Holt

Jarret Dillard broke his ankle in the Jets game and will be out the remainder of the year. It happened in the second quarter at a critical third and five. Jarret ran a clean route, setting his break and cut for the sidelines, one yard past the marker. Donald Strickland and Kerry Rhodes were in pursuit. David hit him just as he came open and Donald Strickland rode him to the ground. Jarret hung on to the ball, made the first down, and then rode the cart.  I couldn't help but think about him all day today. 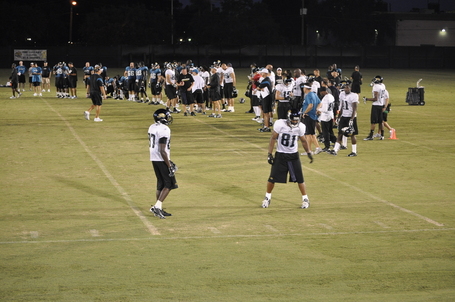 I jokingly call him Baby Holt because I noticed he made friends with Torry at training camp. Everywhere Torry went, Jarret went. During pre-season, when Jarret got in the game and made a play, he came to the sidelines looking for Torry.  It didn't take long to find him, Torry was waiting to congratulate him.  The relationship seemed special and Jarret waited for his chance during the season.

Jarret demonstrated his gravity defying abilty during the Chiefs game here in Jacksonville. It was third and fourteen with David standing in his owm endzone, Jags up 7 to 3.  David threw a rope over the middle 40 yards to a leaping Jarret Dillard. Jarret is 5 foot 11 inches and went over 6 ft 2 inch Javon Belcher to grab the ball.  It was a stunning catch and one the home crowd hadn't seen in five years. We came to our feet in appreciation.

Jarret Dillard was a Gene Smith gem in the fifth round. In 2006 Jarret was a sophmore at Rice.  Rice went on a terror streak to finish the season with a 7-1 run.  That brought Rice it's first bowl game in 45 years. During that run of 8 games, Jarret caught 55 passes and 16 touchdowns. I'm sorry, maybe you didn't quite understand that. In 8 games he caught 55 passes and 16 touchdowns.  One more time, in 8 games, first bowl game in 45 years. Can you feel the respect and admiration?

There are two guys who held the record for touchdowns catches in consecutive games, Larry Fitzgerald and Randy Moss each with 12 consecutive games with a touchdown.  Only one guy has more, Jarret Dillard has 13.  Very few players have meant as much to their school football program as Jarret Dillard did to Rice.  He was amazing. Watch this video if you want to understand how special this guy is.

I always wanted him to get in the game as a Jaguar. I knew he was a player who could make a difference.  I can't help but think about him now and wish him well.  Get well Baby Holt. We want to see you back so very very much.