[Editorial NOTE: Rather than post something above such a spectacular article, please take note that it was just reported that Trent Edwards will be replaced by Ryan Fitzpatrick as the starting QB. Terry's stat-sheet should look even better after next week.] -Collin Something is happening on the Jaguar defense and it looks very good. This chart shows the average yards allowed by the defense for the first 5 games though Seattle and the average yards allowed for the next 4 games through New York. 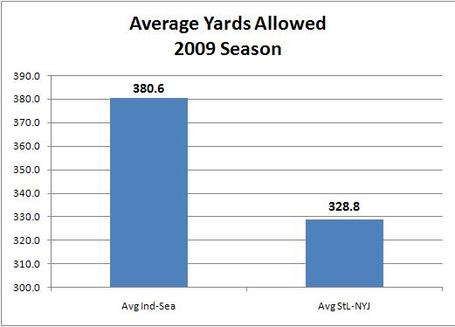 While on the radio program a few weeks back I wondered why we were so bad on defense, especially pass defense. Mel Tucker didn't have Greg Williams reputation as a defensive genius, but he always had good pass defense. Cleveland had near the top numbers in interceptions and was fairly stout against the pass, they just couldn't stop the run. So why were we having so much trouble?  I surmised at the time that it might be temporary and as soon as Derek Cox learned more and the secondary got settled, it would improve.  I think that might be happening.  The average of the last four games includes the 430 yards Tennessee hung on us. After the jump, let's look a little deeper.

I did a study about a year ago in which I took every game played in 2007 and averaged the defensive yards allowed by the winners and losers.  The numbers said that winners averaged 300 yards allowed on defense while losers averaged 330 yards allowed.  I did the study for 2006 and 2008, all told I looked at over 700 games played. The numbers never move, winners allow 300 yards on average, losers allow 330 yards on average.  Now a team can lose giving up only 250 yards and a team can win giving up 400 yards, but not often.  If a team allows 300 yards or less, it has a 75% chance of victory.  Before you site examples of times this doesn't work, I get it. The Redskins are allowing under 300 yards this year and they are losing and the same with the Jets.  My arguement is both of those teams are closer to winning than we might think. The Redskins need just a little bit of offense. Sorry, I digress, back to the Jaguars.  I consider the 300 yard metric to be the champion level defensive metric. Hit that and you are playing good defense. Let's look at the Jaguar defensive performance this season. 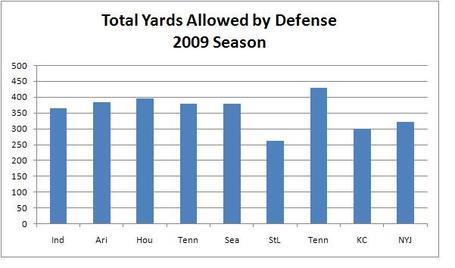 Do you see the difference? Do you begin to see a move down to the 300 yard level?  To be sure I am not being a homer, I ran a statistical analysis on the two averages I mentioned above.  I wanted to know if the change was real or just random variation.  Even though we have a small sample size, the averages are different to an 88% confidence factor. Statisticians like to see a 95% minimum to state anything with certainty, but this isn't bad.  What it says is it looks like our defense has probably changed for the better, but we can't be sure just yet.  Statistics and I agree, we can't be sure yet, but it looks very promising.

Now defensive performance is based on individuals. Quentin Groves missing a tackle, Reggie Nelson missing an assignment, or any other miss can pile yards on fast. If Rashean Mathis is hurt as seriously as we believe, we might not see him again this year.  That will probably change the defense. Probably? It will.

My point of the article is this, I think Mel Tucker has been good for the Jaguars. I think Jack and Mel are bringing the players along quite nicely.  With an offense able to put up some huge numbers and a defense getting better I can't help but remember the lyrics of an old Peter Frampton song...

Keeping my fingers crossed and my prayers for Rashean.