Was Jacksonville and the NFL a case of mutually assured destruction?

Share All sharing options for: Was Jacksonville and the NFL a case of mutually assured destruction? 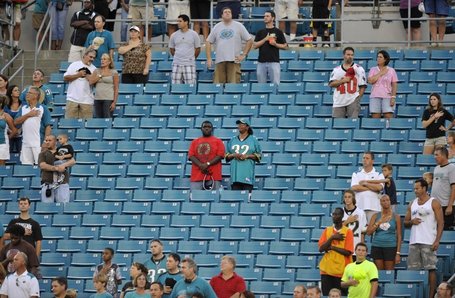 A typical sight at home games this season

Anyone familiar with the Cold War knows the phrase Mutually Assured Destruction. It, along with the United State's paranoid Domino Theory were the two driving forces behind almost every foreign policy decision made from 1949 until 1991.

For those of you who may not be familiar with the idea, in a nutshell, it said that if either the US or Soviet Union finally decided to launch nuclear weapons at the other, the resulting retaliation would leave both countries devastated and broken.

The nuclear arms build up of the Cold War gave us some great theater and a lot of "What if" scenarios, but ultimately didn't amount to anything, thankfully. Instead, it was much more a promotional vehicle than anything. Threats to cut the military budget? Just throw up some footage of the Soviets marching their newest ICBM past the Kremlin and nobody said anything. Deep down, I don't think either side really intended to make good on their threats as they knew the other side wasn't crazy enough to end the world either.

I can't help but wonder if this same principal applies to the NFL and Jacksonville. Ironically, during the 1970's and 1980's, Jacksonville was in much the same position Los Angeles is in. We were the big bad boogyman NFL owners used when they wanted new stadiums. They would just point to Jacksonville and say, "If you won't give me what you want, I have a 80,000 seat stadium and town rabid enough to fill it in Jacksonville."

Within the span of a few years, the Colts, Falcons, and Oilers all used Jacksonville as a ploy to get new stadiums. The most famous example was when Colts owner Bob Irsay landed via helicopter in the Gator Bowl during Colt Fever Night. You're welcome Indianapolis.

However, I have to wonder now if any of these owners (or the NFL at that point) were even genuinely interested in Jacksonville? If Jacksonville would be just another second rate Southern city at this point if the Jaguars left, what was it then? The owners had to see that. They just figured everyone else around them would be so paniced at the thought of losing a team that nobody would put two and two together.

Maybe Pete Rozell forgot to brief Paul Taglieabue as to the top secret Jacksonville policy. Never actually let a team move there, but drum it up as much as possible to make sure we get the extra few hundred million in local taxpayer money for the next palace.

When Jacksonville was selected for the 30th franchise in 1993, it was a decision that directly impacted the fortunes of numerous franchises. Instead of a proper expansion team in Baltimore, we helped cause one of the bloodiest divorces in sports history between Art Modell and Cleveland.Instead of the St.Louis Stallions, we have the St.Louis Rams and no team in LA.

Maybe it was mutually assured destruction after all. The NFL is finally crazy enough to award Jacksonville a team and as a seemingly direct result, loses all of it's presence in Los Angeles. Jacksonville got what it seemingly always wanted, but now is acting like a spoiled 15 year old girl who wants to upgrade to the latest iPhone every year. Be damn happy you have what you do and hope you'll stay as fortunate as you have been.