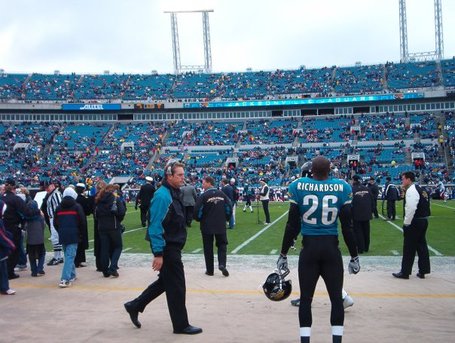 The date was December 26, 2004. A season which saw the Jaguars lose three straight after starting 6-3, appeared to have turned around with two victories, the big one an upset of the Packers a week earlier in twelve degree weather at Green Bay. At 8-6, only the six win Texans and the five win Oakland Raiders stood between Jack Del Rio and his first playoff appearance. The Jaguars talking post-season was something few had anticipated.

It was 40 degrees at kickoff in Jacksonville. The wind chill made the temperature below freezing. With a wild card spot ready to be taken, the Jaguars came out of then Alltel Stadium to the roar of roughly 33,000 fans. The only accomplishment that day was becoming the first ever team the fledgling Houston Texans would shut out.

Apparently Christmas took a lot out of the home team and the fans, but not the Texans. With a Steelers victory over the Ravens that same day, beating Houston all but sealed the playoff birth. Maybe the respect factor trumped the playoff factor.

"They're sitting there worried about Baltimore and Pittsburgh. They should have been worried a little bit about us." - Texans defensive end Gary Walker

"I knew we had a good chance coming in here, but for some reason these guys don't respect us and they came out and played like it." - Texans defensive tackle Seth Payne

Though this past weekend it was a Baltimore win over Pittsburgh that was needed, the irony is that the participants are the same. What has not changed is that the stage has been set and act one is Houston.

True there are more games to play this time but the goal isn't any different. Sure the weather will be significantly warmer but the air is the same. Once again it is the Jaguars to lose.

Presently holding the last wild card spot, a win against the Texans would improve upon their AFC record and strengthen their tie break advantage against the likes of Denver, Pittsburgh and Baltimore. More critical may be the need to field at least a .500 record within the division.

With a game still remaining against the Indianapolis Colts, the Jaguars could finish with a winning record in the division for only the 2nd time since the inception of the AFC South.

For Houston, this is their last division game and 2-4 could be a breath of life. Lose this game and 1-5 all but eliminates them. The revived Tennessee Titans are more than capable of beating the Colts this weekend which would put them at 3-3 and solidly in the hunt. The Jaguars can't afford a 2-4 division record with the Titans in striking distance.

We know what the Jaguars face this December. After hosting Houston, the Dolphins and Colts visit. The regular season ends at New England and Cleveland. They've already used their mulligans at Seattle and San Francisco so there is no margin for error. The significance of beating Houston has become critical.

I can't help but look at Jack and see Bill Murray in Groundhog Day. A visiting Houston team wanting respect. A Jaguar team written off before the season had begun. Playoff implications in December. The Jaguars in the drivers seat. Yes Jack, you've been here before. The question is whether the team and the fans will fail to show as they did 5 years ago. If history does not repeat itself, the playoff talk gets its second wind.