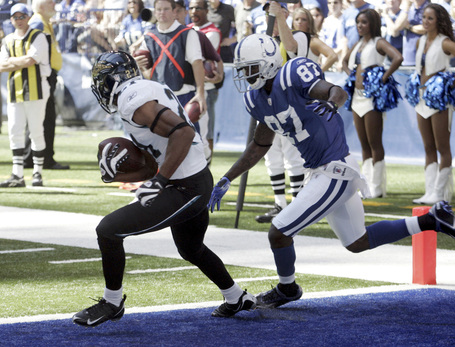 A common sense approach to beating the Indianapolis Colts has been control the clock to keep Peyton Manning off the field. It is a mantra spoken by Jack Del Rio in past seasons and has proven successful. One only needs to look at last years game at Lucas Oil Stadium where Jaguars held a 41:35 to 18:25 possession advantage. A 51 yard Josh Scobee field goal with 4 seconds left proved the difference in a 23-21 victory.

But how successful has it really been? Earlier this year Manning utilized less than a quarter of the game (14:53) to dismiss the Miami Dolphins. Of the Colts 14 wins, over half (8) have come when they lost the time of possession advantage. Half of those were games where the Colts won by more than a touchdown.

Manning doesn't need time. There are more than enough offensive weapons for him to strike quickly. Beating the Colts boils down to simple math: 7 is greater than 3.

The Miami game is a prime indicator that field goals are not sufficient. Sure you'll catch number 18 on an off day such as San Francisco, Baltimore and Denver did. The 49rs problem wasn't their inability to score touchdowns, they had two, but rather they couldn't score enough. Denver had the same problem, and this was a game in which they picked off Manning three times.

The Ravens may have had the best shot at defeating the Colts aside from the Dolphins. Down by two, a late interception in scoring territory sealed the game. Their problem was five field goals and zero touchdowns in a game where the Colts, again, gave the ball away three time.

This year's undefeated Indianapolis team is doing one thing better than any other team in the league: third down conversions. While the Jaguars have a respectable 43.4% success rate (6th in the league), the Colts are converting 51.6%. What is more telling to their success is that they've only been put into third down situations 159 times, which ranks them third lowest. Defensively the Colts and Jaguars are third and fourth in allowing teams to convert at 44.3% and 43.4% respectively.

Additionally the Colts are making the most of their time with the football. Per Football Outsiders they have the highest Drive Success Rate (DSR) at 76.4%, which indicates the percentage of down series that results in a first down or touchdown. They are second only to the Saints in touchdowns per drive at 32.3%. The Jaguars, meanwhile, sit 17th with a 67.1% DSR and 17th at 18.6 touchdowns per drive.

A quick look at the history of this series will show you the two play each other tight. Only three games jump out as one sided. With the changes each team has undergone this past year, history may not be a telling indicator of how Thursday will turn out. Even looking at the Colts 14-12 victory in week one appears more as a first run of two new teams. The Jaguars with the roster moves and the Colts with the coaching changes. Though both have progressed, it is clear Jacksonville still has questions to answer.

Keeping Manning off the field is a component to a successful game plan but it isn't enough. Defensively this team must not give Manning advantageous downs. Offensively the Jaguars must find a way to fix their red zone deficiencies. You do not beat perfection with mediocrity.