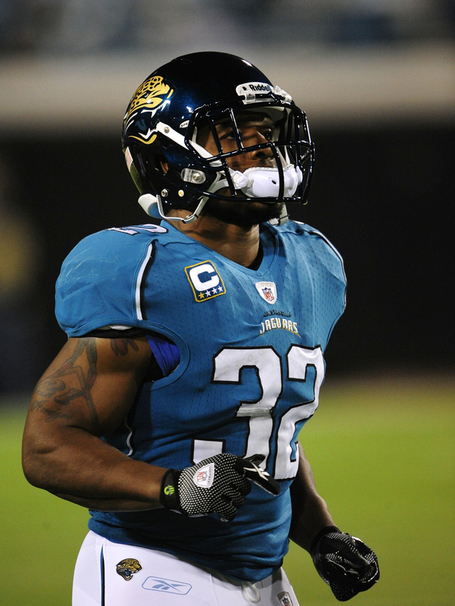 Maurice Jones-Drew(notes) #32 of the Jacksonville Jaguars looks on during warm ups against the Indianapolis Colts at Jacksonville Municipal Stadium on December 17, 2009 in Jacksonville, Florida. (Photo by Sam Greenwood/Getty Images)

Chalk this up as just another close win for the Indianapolis Colts over the Jacksonville Jaguars. The Colts continue on their trek to perfection. This one played out completely opposite to their first match-up, a 14-12 Colts victory. This time the offense would take center stage. Even with two chances in the last five minutes, the Jaguars could not take their place in the history books to become the story of the team that ended perfection.

The usual suspects assumed their time in the spotlight as Peyton Manning, Reggie Wayne and Dallas Clark all played a major role in this hard fought game. The only mistake any of the three would make was Clark mishandling a Manning third quarter pass which led to an interception, his first pass of the game not caught by a Colt (the first incomplete pass would come a series later.)

Big plays will be lauded. Chad Simpson's 93 yard kick off return. Wayne's 65 yard touchdown catch that would end up being the game winner. Clark's circus catch in the end zone for the the Colt's first score.

In turn the Jaguars failings will be cited as causes for their loss. Reggie Nelson's tackling which accounted for scores by both Clark and Wayne. Late game penalties which negated big plays. David Garrard's overthrown passes at critical times. The lack of any real pressure on Manning for most of the game.

It did not have to be this way.

If David's pass does not sail over the head of Mike Thomas the talk would be much different. If Josh Scobee makes his 57 yard field goal attempt before the half the Jaguars may not even need David to attempt that throw as their late game drive would need to only have yielded three points instead of seven.

We might have heard analysis of how Dirk Koetter's spectacular play calling allowed Jacksonville to own an 11 minute time of possession advantage while attacking the Colts in a very balanced fashion with 44 pass plays to 32 run plays. Or of how committed Koetter was to the run and how the play selection showed a faith in his quarterback and his line.

The talk about Garrard would be his play making ability on more than one occasion. There was the pass to Mike Thomas for a touchdown on third and goal from the 13 yard line. The scramble and nine yard touchdown pass to Maurice Jones-Drew. A third and seven late fourth quarter throw on the run to Mike Sims-Walker who was triple covered.

The progression of Marcedes Lewis might have been a highlighted. Not only did he lead the team in yards per catch with 13.3 but he also had the longest catch of the night at 25 yards. He was also noted for his exceptional blocking which was a component of Garrard's success. Tonight Lewis stood out not necessarily for his gaudy numbers but for his reliability.

How much praise would the offensive line get? Allowing time for Garrard to go through his progressions. Dominating the Colts defensive front as they opened holes for a running attack that averaged 4.1 yards per carry and 139 yards for the evening.

Maurice Jones-Drew, of course, must get his time. With three of his last four games being disappointments and with questions about whether he was a 16 game back being bantered about, Drew's play did nothing short of stamping out those fires. He was patient while waiting for the lanes to open and fierce when he hit them. He managed 140 total yards, 110 on the ground and 30 through the air, and a touchdown both rushing and receiving.

Though giving up over 30 points, the defense would still get applause. The outstanding linebacker play of undrafted rookie Russell Allen and the veteran Justin Durant, both of whom seemed to have their motor running for a full 60 minutes. Gerald Alexander's knockdown of a Manning to Clark pass on third down with a little more than two minutes left could have been the defensive play of the game.

For Jack Del Rio, it would have made his coach of the year campaign that much stronger. Fielding such a young team against the veteran Manning led Colts, his past failings would have taken a back seat to accomplishment of handing Indianapolis their first loss.

So many woulds and mights.

The critical eyes will still look to focus on the cracks in Jim Caldwell's armor. Already there are conversations and articles stating how the Jaguars exposed the means by which one can take Indianapolis down. But those stares will be harder and more invasive to the team that almost won. Del Rio does not have the safety net of an undefeated team and a Super Bowl run. Instead he will deal with how the playoffs were lost and why his team can't finish games.

Jaguar fans, players and coaches may remember this game. It may eventually become a moment which, through losing, the team grew up. But for now they are just another team that fell short in their attempt to stop perfection. What most will remember is that, in week 15 of the 2009 NFL season, the Colts won.