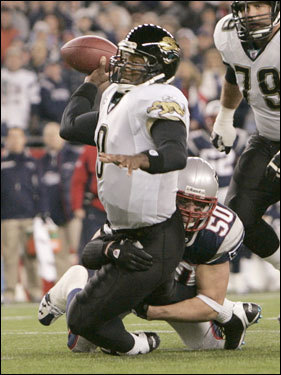 David Garrard (9) threw a touchdown pass while being tackled by the Patriots Mike Vrabel (50).

Even the most optimistic Jaguar fan must admit that a victory in Foxborough would be nothing short of a Christmas miracle. Coming off a heartbreaking loss to Peyton Manning, they now get to travel and face Tom Brady. All that is missing is a season ending game in New Orleans.

You're a mean one, Mr. Grinch. The greatest weakness of the Jaguars, the secondary, is forced to face two of the most prolific passing attacks in the NFL with the playoffs on the line. If the Colts caused you concern, this game should totally horrify you.

The Patriots have two 1,000 yard receivers in Randy Moss and Wes Welker, along with an efficient pass catching back in Kevin Faulk. Their offensive line has given up 16 sacks and only 64 quarterback hits. Oh, and the Pats get to face the worst pass rush in the league. Nothing implies the Jaguars can get to Brady with any consistency. They have done nothing all year, save the final defensive stop in their win over Buffalo, to warrant any belief the pass rush will suddenly appear.

What can the Jaguars exploit?

Their strength is on the ground and they get to face a defense that has allowed a league-low three rushing touchdowns all season.

Help from Mother Nature? In case you may have forgotten, the 59-0 dismantling of the Titans in week six was executed in a snow storm.

Now is not the time to expect a Derrick Harvey or Reggie Nelson to all of a sudden find that inner playmaker. Nor can we expect Derek Cox, Gerald Alexander and Rashean Mathis to collectively do what only the Darrelle Revis led Jets could do against a Welker-less Pats.

It is difficult to find any clinquant of hope.

That is the same way we all felt back in 2007 when the Jaguars went to face the perfect Patriots. It was a game in which, much like last week's game against the Colts, the Jaguars rode the wave of David Garrard's arm. Unfortunately, when faced with perfection in both instances the Jaguars made just enough mistakes to fall short of victory.

David rebounded from sub-par games against Pittsburgh (2007) and Miami (2009) to put the team on his shoulders and quiet the nay-sayers. When pundits were playing the funeral dirge for a one dimensional running team, number nine answered back.

There is your hope.

New England has given up over 400 yards of total offense four times this year: all loses. In those same games they gave up over 300 yards through the air. Simply put, you want to beat the Pats you'd better be successful in the passing attack.

It isn't even a matter of getting up early. In loses to Indianapolis, Denver and Miami, the Patriots couldn't hold onto fourth quarter leads. This is not the same secondary that thwarted Peyton Manning annually.

Surely, many of you are questioning whether David can come through. His big-game failings are well documented, and on the road is where we've seen him at his worst. However, he has been to the north east before and performed above expectations. Remember, Garrard's weapons against the perfect Patriots were Matt Jones, Dennis Northcut and Reggie Williams.

Maybe this time a wide receiver will make the catch...Or Dirk Koetter will call another gem...Or possibly the defense will be allowed to make plays rather than sit back and wait for someone else to make a mistake. This franchise has seen miracles before. It is the perfect season for one; the Jaguars are due.