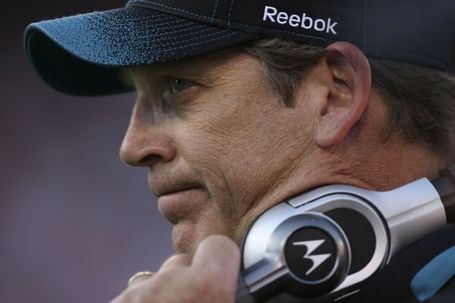 Having to face the Indianapolis Colts and the New England Patriots in back to back weekends was the perfect measuring stick for this franchise. After months of getting by on beating teams in the bottom half of the league, the scheduling gods (unbeknownst to them) afforded two trials by which the reality of Jaguar football could be defined. That the team failed them both should not be surprising nor disappointing.

During the game Jack Del Rio looked like a war general who knew he was leading his troops into certain doom. In his post-game interview the words echoed his body language. "We're just not able to rush the quarterback well enough or cover their receivers well enough to slow them down and I think that was pretty obvious early."

He further noted the Jaguars were coming into the game with matchup concerns and that if they couldn't get pressure on one of the top quarterbacks in the game there was going to be problems. It was as if he was reading this from a prepared script created back in August.

Offensively the failures weren't new either. The interior of the offensive line afforded little room for David to step into his throws and few holes for Maurice Jones-Drew to find daylight. The young receivers struggled against the Patriots secondary. Maurice commented that they were all "not on the same page as an offense", a fact that resonated in past loses to Arizona, Miami, San Francisco and Seattle.

Beginning the season the goal was to mask holes and make this team as competitive as possible. For weeks the belief has been finishing at or near .500 and being in the playoff hunt was an indication of progress. It is hard to see progress when cracks in the week two loss to the Cardinals and the week five loss to the Seahawks continue to breathe. There was nothing new about how the team failed today, but is that really where the concern should reside when talking about realistic expectations for the future?

There is obviously room for optimism. A receiving corps that allows us to forget about the ineptitude of the past four years. Rookie offensive tackles that flourished and a defensive tackle upon which to build for the future. That optimism is roborant but deceptive. The playoff run of 2009 should not be considered a prelude to a playoff spot in 2010. The reality is that the condition of this team after the 2007 season is not one to be resolved in one year.

While we can applaud the coaching staff for trying to mask the defensive shortcomings with a new scheme the fact remains every position needs to be addressed. John Henderson probably does not have another good year in him and as we saw in these past two games there is zero interior pressure which allowed a nice pocket to throw from.

The lack of speed at defensive end when rushing the passer is mirrored at linebacker and defensive back. Teams easily picked up the blitz packages giving opposing quarterbacks even more options from which to choose.

As Derek Cox was learning against some of the best wide receivers in the league there was little safety help that would facilitate any press coverage, something this team could definitely use to aid the pass rush. The lack of depth at cornerback was exposed early in the season and if not for exceptional play from Tyron Brackenridge some games would've been much worse.

On offense more questions were answered but there is a real inability to evaluate key positions. How much of a role do the failures at guard and center play into Garrard's problems at quarterback? With the limited number of draft picks and with the many holes on defense it seems the team must head into 2010 with a leap of faith regarding the positives from David. At times the passing game was stunning and he has developed a nice rapport with Marcedes and Walker. Still it is difficult to see where Holt will be or if the rookies (Dillard, Thomas and Underwood) are every down players.

There are also questions as to what degree of growth Britton and Monroe will have going into next season. If the questions at guard and center can't be answered any weakness at tackle will be amplified. Additionally you're looking potentially at a line with limited NFL experience if help is localized in the draft.

Though some will call for his head due to the late season collapse, it is Jack along with his coaching staff which seems more than ready to start into next season prepared. Many of us have questioned play calling or their ability to motivate and coach the players to excel, but the fact remains that this team simply isn't very talented. In spite of that the staff managed to take a team many expected to struggle to win four games and put them into game situations which demanded growth from experience.

For players, coaches and fans alike we should bask in the Jaguars being part of the playoff picture late into December. There should also be cognitive hesitance assigning goals to next year. Seeing how this team performed against two Super Bowl contenders, the reality is that there are still leaks to patch and past repairs to evaluate for stability. That should not detract from how far this team has come. Even in spite of Sunday's setback Jack was quick to point out the positives.

The amount of commitment, the amount of effort, the amount of energy...those are good things. We don't want to lose site of that. I think we want to understand where we are as a football team. Build on the positives, let the negatives sink in and really feel it because we want to do all we can going forward to be stronger.

Before you find yourselves in the emotional hallows prompted by another embarrassing road loss try to remember all the needs after 2008. The persistence of specific points of failure serve to map out the next stage in rebuilding. Getting caught up in "it happened again" distracts from what was fixed.

The reality is that there is still work to do.