A Moment in Jaguars History: December 16th, 2001vs Cleveland aka "The Beer Bottle Game"

Share All sharing options for: A Moment in Jaguars History: December 16th, 2001vs Cleveland aka "The Beer Bottle Game" 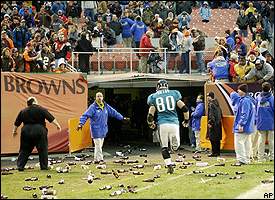 The Jaguars and Browns have an interesting history. The Jags were the last team the original Browns played before leaving for Baltimore, they played in the game in which Orlando Brown was hit in the eye with a flag, and the Browns miracle Hail Mary to beat the Jags in 2002 was probably the final nail in Tom Coughlin's coffin.

However, no game matches the insanity of the one played in December of 2001. The Jaguars limped into Cleveland at 4-8 while the Browns were 6-6 and in the thick of the AFC Wild Card race.

Mark Brunell was sacked a franchise record eight times and a Mike Hollis PAT was blocked, but somehow the Browns offense was even worse. The Jaguars had a 15-10 lead in the fourth quarter.

However, Browns QB Tim Couch began to drive the offense down the field late in the fourth quarter. The Browns had a fourth and 2 with just over a minute left in the game. Couch apparently connected with WR Quincy Morgan down to the Jaguars 9 yard line. The Browns then spiked the ball with 48 seconds left. However, after the ball was spiked, the referees whistled that the play was under review.

Needless to say, both teams were puzzled by the call. It seemed a straight forward spiking of the ball. Instead, the officials said they were reviewing the catch by Morgan. The Browns vehemently protested as NFL rules stated that a previous play could not be reviewed once another play was ran. However, the officials still proceeded to review the Quincy Morgan catch and ruled that it was an incomplete pass. After the game, the officials said the booth had buzzed in before the spike of the ball but the officials did not respond quickly enough.

The events that followed that call can only be described as bizarre. Immediately following the reversal, Browns fans pelted the field with beer bottles and other debris. Several Jaguars were quoted as saying they were scared for their lives. Then Jaguars and former Brown Keenan McCardell likened it to the near riot Browns fans had in their final home game before moving to Baltimore. A Brown's coach was injured during the downpour and referee Terry McAulay declared the game over despite the minute still left to be played.

Over a dozen fans were arrested before Commissioner Paul Tagliabue ordered the game to be completed. More bottles and debris were thrown once the Jaguars returned to the field amid a chorus of boos.

After the game, Cleveland no longer sold beer in bottles, along with several other stadiums.  The Jaguars would finish the year 6-10 while the Browns would limp to a 7-9 finish and firmly out of the AFC playoff picture.