Top 10 Most Memorable Jaguar Wins of the Decade

Share All sharing options for: Top 10 Most Memorable Jaguar Wins of the Decade 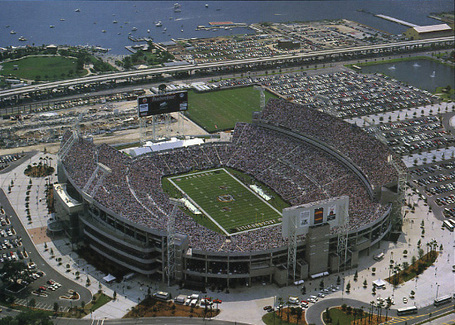 Well it's New Year's Eve and that, of course, means that it's the day for countdowns. As the decade comes to a close, we can't say the last decade has treated us fans too poorly, but it hasn't treated us with any deep playoff runs either. It was a 10 year run that earned the title of most mediocre team of the decade from SBNation blog FrontOfficeFans. Although I can't say I disagree, that title doesn't mean that the Jaguars haven't provided us fans with some ups in the last decade. Here are my 10 most memorable victories of the last 10 years:

Byron Leftwich showed us real promise in this game as he audibled Jimmy Smith into a route that lead to the game winning touchdown in overtime. After surviving a replay review, the catch was ruled a touchdown and the Jaguars walked off the field victorious. The defense was in top form injuring both starting QB Chad Pennington and backup Brooks Bollinger.

It really wasn't until this Jaguars victory that the national media took notice of a surging Jaguar team that looked poised to make a playoff run. Don't let the score fool you, the Jaguars won handily. The two headed monster of Fred Taylor and Maurice Jones-Drew stuck it to the Chargers, and Shawne Merriman in particular, while David Garrard stayed efficient and effective. The Chargers went on to win their next 8 and play in the conference championship.

Beating a rival team is always fun, but highlighting it with a huge milestone makes it even better. Fred Taylor reached 10,000 yards in his career with a 15 yard rush up the middle and highlighted it by running over the Titan safety. The Jaguars throttled the Titans just one week before the #9 game on the countdown.

The 1-7 Jaguars were given no chance by the national media to beat the 7-1 Colts yet they played them tough the entire game. A game winning touchdown by Fred Taylor gave the Jaguars the victory and capped off a 152 yard rushing performance by Taylor. Ultimately it was a disappointing season, but this game provided a high point for the Jaguars and Jaguar fans.

Earlier in the week Jon reminded us of the fiasco that was the Bottlegate incident. After what seemingly appeared to be a first down by the Browns, Cleveland ran to the line a spiked the ball to stop the clock and give themselves a 2nd & goal with less than a minute to play and a chance to improve their playoff chances. Instead the referees decided to review the catch that earned the Browns a first down disregarding the spiked ball in spite of the complaints from Browns coaches and especially fans. Fans showered the field in bottles to show their disapproval of the call and the game was delayed 45 minutes before the Jaguars could come back on the field to kneel out the remainder of the clock.

In an incredible display of rushing power, the Jaguars completely dismantled the Colts with a franchise record 375 yard rushing. Maurice Jones-Drew also broke a Jaguar record with 303 all purpose yards. Even after Fred Taylor and Maurice Jones-Drew left the game the rushing attack didn't stop with Alvin Pearman adding a touchdown to the total.

The Jaguars defense suffocated the Steelers in a strong, monday night display. Pittsburgh was held to only 167 yards of total offense as the Jaguars won only by the foot of Josh Scobee. His three field goals were the only scores by the Jaguars who were also scoreless at halftime.

The Jaguars stood between the 7-7 Saints and a chance at the playoffs. With just 7 seconds the Saints ran their final play with time expiring, which became the now famous River City Relay. Lateral after lateral led to a 75 yard touchdown for the Saints as Jerome Pathon ran in for the score for what looked to be the game tying touchdown. That was until John Carney missed the extra point and gifted the Jaguars a victory. The River City Relay went onto win the ESPY for play of the year.

These 99 Jaguars were the best team the city of Jacksonville ever had. They finished the regular season 14-2 losing only to the Titans twice. In only the second game of the decade for the Jaguars, they opened the playoffs against the Miami Dolphins in Dan Marino's last game of his career. It quickly turned into a blowout as the Jaguars leapt out to a 24-0 lead in the first quarter only. Fred Taylor provided the highlight of the game with a 90 yard touchdown run early in the game. The Jaguars never took the foot off the gas as they throttled the Dolphins with a franchise high 62 points and moved on to the conference championship.

The Jaguars looked like a potential Super Bowl contender and one of the only teams that could challenge the undefeated Patriots. But first they would have to beat the Steelers on the road in 39 degree weather. The Jaguars jumped out to an early lead but imploded in the 4th quarter, allowing the Ben Roethlisberger led Steelers to battle their way back to a one point lead with time dwindling. The Jaguars game-winning drive stalled and they were put into a 4th & 2 situation that had to be converted. David Garrard provided the Jaguar fans with the highlight of his career. A QB draw from Garrard broke through the middle and turned into a 32 yard gain that set up a game winning field goal from Josh Scobee. The win was only the second playoff victory of the decade other than the victory against the Dolphins and provided a gut wrenching finish. 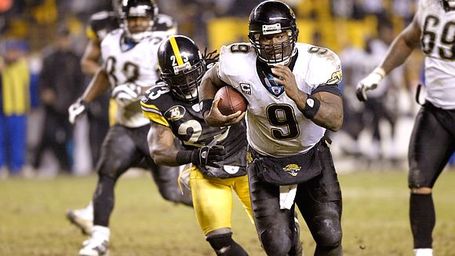 Happy New Year everyone! I look forward to watching more memorable moments in coming years with all of you.