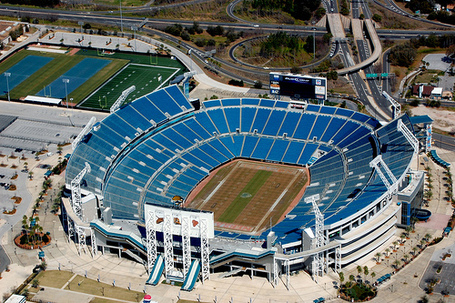 The question is really a double entendre. Why do we want this team? Why do we want to lose this team? Recent news from Los Angeles has energized the monster. Seeing it walk and hearing its menacing voice has left the citizens distraught. Prophets on street corners, perched high on their crates, warn those who will listen of the impending doom.

Now where did I put that crate?

Being the "NFL's miscalculation" is worn like a hair shirt by the city and the fans. Groups like "Revive the Pride" and True to the Teal" are fighing hard to get this community involved in support. This weekend presented itself as an opportunity to make a statement to the league that the passion is still there. Yet the stadium will once again be hauntingly under attended.

These last three home games were, I thought, a sure draw based on where this team stands in light of where they were supposed to be. Boy was I wrong. Now with the news that Los Angeles will be ready for a team, or teams, within the next two years how does the city respond? I'm not sure we'll see much above 40,000.

Don't throw away your team gear. It may be worth something.

Let me put this into perspective. Back on December 1, at Jacksonville defeated the Cincinatti Bengals 30-27 before 57,408 fans. It was a game that followed a 28-25 OT victory in Baltimore. At the time the team was 5-7 and no one was thinking playoffs. The victory would be one of five to close out the season on an unbelievable run to the AFC Championship Game.

How much different is the 1996 team from the 2009 team? In hindsight we can see the talent that was Mark Brunell, Jimmy Smith and Keenan McCardell. It would be a fair comment to say that, offensively, we've seen glimmers of the same excitement in David, Mike and Mike.

Defensively is another story. Apart from Daryl Smith, Rashean Mathis and John Henderson there is no real match for Tony Brackens, Kevin Hardy, Jeff Lageman, Joel Smeenge or Clyde Simmons. This years team looks to rookies Derek Cox and Terrance Knighton to be impact players.

But that new car smell was still wafting through the air 13 years ago. Today we're tainted and cynical. We look at this team and our logic tells us there is no way this team can make the playoffs. Why bother buying tickets to watch a dying beast? The San Francisco loss gave evidence to the detractors, allowing them to leverage the teams inconsistency and youth as a reason not to "waste money".

I know what you're thinking. The remainder of the 2009 schedule includes only one bad team reamining in Cleveland. The victory run in 1996 ended against the 7-9 Seahawks and the 3-13 Falcons. A fair point, but the Jaguars were still fielding an expansion roster. You can't convince me the Bills and Broncos teams they faced in the playoffs are far off the Colts and Patriots teams they'll face in the coming weeks.

Regardless of whether the playoffs are probable, the fact remains this team is in the playoff hunt. Much like you could never have predicted Morten Andersen would miss a chip shot field goal you can not predict what these next five games hold. What is your motivation: the probable or the possible?

So it begs the question: Is it probable or possible this team won't move? Good question. Logic tells us all the factors are in place to move this team as a sound business decision. Yet we know it is still possible based on the stadium lease and the fondness of the owner that this team stays.

For those of us who have followed Vic Ketchman we know he leaves clues in his "Ask Vic" column. Dismiss the reports from Los Angeles and turn your eyes from Yahoo articles stating the Jaguars are moving but consider what Vic is actually saying with these recent responses to questions from fans.

David from Charlotte, NC Tim Tebow is being projected to be picked in the mid to early 20’s, which is where the Jags will likely pick if they can win the next few games. Do Gator fans realize these next few games might actually be for Tebow? If so, "The Jack" should be packed, right?
Vic: I wouldn’t worry about that.

Darian from Jacksonville The Jags are without a second-round pick this year, which I think is the round Tebow should be selected. Will this force the Jags to draft him in the first round because of this?
Vic: I wouldn’t worry about that.

Todd from Jacksonville From Craigslist: "Pittsburgh Steelers PSL-2 in Sec 236, $25,000 each (Irwin). Two Steelers seat licenses in Section 236, Row F, Seats 13-14, priced at $25,000 each. Great investment!" Are we not so lucky to have football in Jacksonville for pennies compared to this? Those fans will pay any amount to see their team play and we can’t get people to pay an amount far less. That’s just the PSL’s, not the season tickets. Crazy! Could you imagine the crowds if we had PSL's?
Vic: I’m so sad for Jacksonville. It doesn’t understand the value of what it has and what losing it could mean.

John from Jacksonville Beach, FL How sick is it that a seat license could cost $25,000 in Pittsburgh? I feel sorry for them. Do they realize what a miserable life they have? Don't feel sorry for folks in Jacksonville who have much more to do with their entertainment dollar.
Vic: I won’t.

What is he asking? If you listened to him on Jaguars This Week you heard a man that has years of NFL experience warning the listeners that there is little rope to grasp. Take from this what you will.

In speaking with a representative in the ticketing office, the Houston game will be embarassing (my word). The Miami and the Indianapolis games, however, are looking like they may allow the game to be televised. I won't speculate as to what that might mean to the talks of moving this team. I simply don't know if we are beyond the point of no return.

Sadly we will have to live with lack of fan support for a playoff contending team on Sunday. Yes there are some that simply cannot afford tickets but what of those who can? At 1:00 pm I will be sitting in section 226, fully washed in the possibility of leaving the stadium with my team 7-5. If the city and fan base has gotten to a point where even playoff potential is measured by probability this team is doomed.

So here I stand, on my crate and preaching to the choir. I am hoping this isn't the last song of the encore. I do not want this show to end.