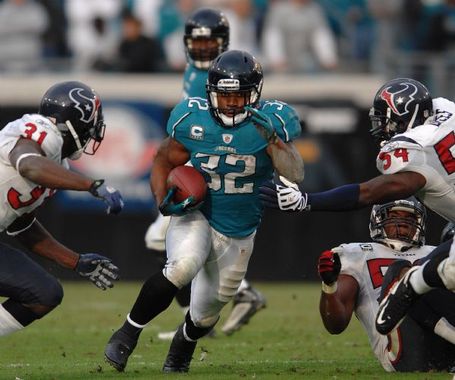 Caption: RICK WILSON/The Times-Union--12/6/09--Jacksonville Jaguars running back #32 Maurice Jones-Drew runs through a hole in the Houston Texans defense to pick up a first down late in the game to enable the Jags to run out the clock during the Jags 23-18 victory Sunday December 6, 2009 at Jacksonville Municipal Stadium in Jacksonville, Fl.

After reading Terry's smart article on how the game was won, I wanted to gain a better understanding of what made that final play such a success. Up to that point the Texans had held Maurice Jones-Drew in check, allowing only 41 yards on 17 carries. With 4:01 on the clock and three time outs remaining there was more than enough time for the Houston defense to force a punt and give Matt Schaub an opportunity to steal this game.

As noted in Terry's piece, here is the breakdown of that final drive.

Houston uses their last time out with 2:13 left to play. Somehow, in six attempts Drew has almost matched his game total. Maurice receives the glory for getting the yards, but the credit lies solely with Jordan Black, Marcedes Lewis, Eben Britton and Greg Jones.

Jordan is lined up as the ROT, while Eben is the RG. The LBs are reading the off-tackle play and the defensive backs are playing up tight. What is interesting about the Texans formation is that safety Bernard Pollard is playing the LOLB spot while Brian Cushing is wide left to contain anything that gets pushed outside.

The RDE, Antonio Smith shoots the "B" gap and Black takes him inside. This has essentially negated any interior lanes but has also opens the "C" gap. Black has done his job but just barely. Smith is able to get a hand on MJD, something that will actually benefit the play.

Cushing pushes hard up-field, in an effort to get around Marcedes. The beauty of this matchup is Cushing's attempt to put a swim move on Lewis completely fails. Big number 89 gets under the LB's pads and clears out Cushing by driving him deep into the backfield. There is now no one to contain.

Meanwhile, Britton has pulled from his guard spot. Exhibiting great foot speed he fills the lane opened by Black and Lewis, taking out the CB Jacques Reeves (I may have the wrong player here as I couldn't get a good read on the number or name on the jersey). What Eben also does is to negate Bernard Pollard filling the lane from his safety position. Thought not credited with the tackle, he is one of the first to make contact with number 32.

All that's left is for the fullback to finish the task. MLB DeMeco Ryans and ROLB Zac Diles have read the play and are quick enough to get to the hole, actually getting a yard into the backfield. However, Greg Jones meets them just as they begin to turn towards MJD. Like a bowling ball, he takes them both out of the play. The irony is that Smith's brief grab of MJD looks to have allowed a split second for the running back to wait as Jones finishes his block.

As much as the offensive line has been highlighted as a weakness during the season, this play deserves recognition for its dominant execution at a critical time. There is something to be said for crunch-time players.