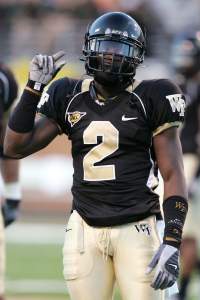 The Jaguars pass defense last year was well, not so good. The Jaguars ranked 24th in the NFL giving up 224 yard per game. Even more concerning, the Jaguars ranked 30th in yards per completion, giving up 8.1 yards per completion. The only other two teams to give up 8+ YPC in 2008? The Rams and the Lions. The Jaguars gave up 55 pass plays of 20 + yards and 17 plays of 40 plus yards, ranking 31st and 32nd in those respective categories. Translation: The Jaguars gave up alot of big plays through the air. Not the news you want to hear in a conference defined by big game quarterbacks.

The Jaguars situation at corner is well, tenuous. Since Rashean Mathis' 2006 season, he has been very on again off again. Dreyton Florence, well I need a rum and coke before I finish that thought. Brian Williams seems better suited at safety, etc.

Enter Alphonso Smith. Smith is part of that 2nd group of corners that fall just short of being grouped with Malcolm Jenkins and Vontae Davis. An on again off again starter at Wake Forest his first two years, Smith came into his own during his Junior and Senior campaigns. Smith managed 15 interceptions and started every game his final two years as a Demon Deacon.

Smith is small, at only 5'9, but he may possess the best nose for the ball and pure coverage skills in the draft.

-Excellent nose for the ball

-Despite his size, not afraid to come up in run support

-Perhaps the best coverage skills in the draft

-At 5'9 he's a liability against larger receivers

-Gambles too much on going for the INT

According to the Blogosphere

I had a conversation with the guys over at Blogger So Dear, SBN's Wake Forest blog, and this is what they had to say on Alphonso Smith.

Where can I even being with Alphonso Smith? He is such a fun player to watch on the field and he is hilarious off the filed as well. I am a senior at Wake Forest, so I have watched almost every one of his games live as I travel with the Deacs. As you probably know, Phonz is undersized compared to the average NFL corner. However, he is relentless in coverage and just has a nose for the ball. Whether he was matched up with the 6'6" Greg Carr of Florida State or Eron Riley, the great receiver from Duke, Phonz ultimately came down with the ball and the win.

Why Should Alphonso Smith be a Jaguar

Smith possesses a good amount of speed, great ball skills, and the tenacity to become a great corner. My biggest regret though is seeing him bite on a pump fake from Tom Brady or Peyton Manning and looking at 6 the other way. Overall, I think Smith would make a great addition to the team and would make a great 2nd round steal.