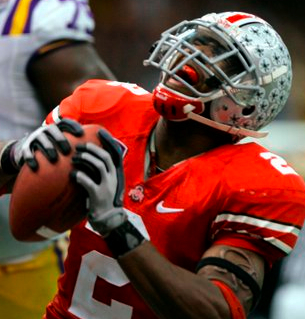 Two seasons ago I projected that the Jacksonville Jaguars would pick Cornerback Darrelle Revis with their first round draft pick and add strength to a position of perceived depth on the team. In those days we had Brian Williams and Rashean Mathis at the top of their game on the corners, making the Revis pick somewhat of a burden of riches pick. Flash forward to two years later and after the abject failure of the Drayton Florence experience, the Jaguars have a definite lack of depth at corner, something that a player like Jenkins could step right up and fill in opposite Mathis.

Now, I could rant and rave a bit about Ohio State players and Big Games, SEC Dominance, and all that Jazz, but to be honest, I really like what I see in Jenkins. He's a tough corner that's not afraid of contact, something our secondary could really, really, really use. Let's take a look and see if he's got Jaguars written all over him.

Malcolm Jenkins: By the Numbers

The 40-yard dash will determine whether Malcolm is a cornerback or a free safety. He claims that he's going to run in the low 4.4 range, should he pull that off, expect to see Jenkins rise into the top five overall draft prospects. Or, in other words, a value pick at number 8.

Mocking the Draft: Jenkins has all the attributes of a lockdown cornerback in the NFL. The winner of the 2008 Thorpe Award, Jenkins is physical at the line, which allows him to knock receivers off their routes. Although often ran zone coverage, Jenkins has the ability to play in a man scheme. Has the speed to run with just about any receiver down the field.

NFL Draft Scout: Lockdown corner. ... Very physical at the line, has a strong punch to knock receivers off their route. ... Attacks ballcarriers behind the line, making secure tackles. ... Also willing to assist in tackles downfield or inside. ... Effective playing off receivers as he can flip open his hips and accelerate, close quickly on the ball in front of him or change direction to mirror receivers. ... Stays with even the fastest receivers down the sideline

Mocking the Draft:The biggest knock on Jenkins is that he is just above-average getting off the blocks. Needs to stay lower in his backpedal so he flip his hips and turn easier. Jenkins will sometimes take too many chance to make a play on the ball. In his tackling, Jenkins needs to learn to keep his head up to avoid injury.

Played a lot in zone coverage and will have to prove he can consistently play in man-to-man. Hasn’t had his mettle tested in some time because teams often avoided his side of the field.

NFL Draft Scout: Creates havoc on the blitz but doesn't always finish. ... Will take chances to make a play on the ball. ... Could improve his tackling in the open field -- will occasionally drop his head instead of watching what he hits. ... Inconsistent taking on and getting off receiver blocks, and will hesitate to get to ballcarriers coming into his area

Why should Malcom Jenkins join the Jacksonville Jaguars?

He could very well be the best available player at 8 if he's still available. Should he run in the 4.4 range, picking a top five cornerback at eigth overall pick is a steal and addresses an area in which the Jaguars struggled last season. Do the Jaguars have bigger needs than CB? Without a doubt. But if Jenkins is available and the Jaguars let him slide, they're abandoning BAP and begining to reach. I'm 100% OK with selecting Jenkins.