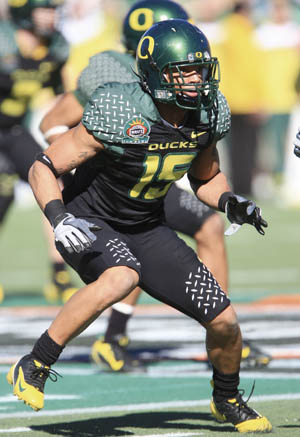 The last thing you want to see between you and the endzone...

Sometimes, when writing these scouting reports, I stumble across a player that instantly draws me into the research. I'll admit, scouting offensive linemen is tedious and wide receivers bore me, but every once in awhile I find someone that I need to scout that really makes me wonder about their future in a Jaguars uniform. This time it was a player that I was unaware of until he was mentioned in the "choose your own scouting report" post. Actually, it took one sentence to sell me on Chung:

"The type of player all good teams need"

"Really", I said to myself, "What does that actually mean?". It starts with a player so devoted to playing and winning that his coaches have a hard time keeping him off the field. He's committed to playing defense and special teams, so much in fact that his coaches struggled to keep him on the sideline on punts and kickoffs:

"He runs by me before I can even stop him," Osborne [Oregon Head Coach] recalled Sunday. "Right then I thought, this is a different kind of guy."

Chung plays strong safety, an area where the Jaguars are facing the loss of Gerald Sensabaugh and a clear lack of a long-term replacement. The Jaguars haven't really had a consistent strong safety since the release of Donovin Darius, due to the injuries to Gerald and the one year tenure of Sammy Knight. Now that the team has successfully developed Sensabaugh into a starter, he'll be leaving to greener fields and bigger paychecks with another roster. Chung is the clear-cut number one safety in the draft and is projected as an early 2nd round pick.

Oh yeah, Dan Kadar, who I grealy respect, says he could be as good as Bob Sanders. Nuff said.

Scouting Report: From the Experts (UPDATED:Mocking the Draft posted a report on Chung yesterday evening, be sure to check it out)

New Era Scouting: Leads the defense on the field. No known character concerns...Chung has become a student of the game. Tough player...Strongly built...Incredibly durable and dependable player. Doesn't come out of the game. Likes to play near the line of scrimmage...Closes on the ball quickly in the short area...Smooth changing direction in coverage. Moves well laterally, especially near the line of scrimmage against the run...Doesn't take false steps. Smooth in his backpedal when he covers in the slot...Great instincts for the position. Reads plays incredibly well. Seems like he's always around the ball, especially against the run...Loves to play near the line to stop the run. Downhill runner. Powerful hitter and a solid tackler. Very active near the line of scrimmage. Takes good angles outside...Will contribute immediately on special teams. Relentless player. Fun to watch [see more...]

NFL Draft Scout: Well-built, versatile athlete who has seen time at cornerback and as a returner. ... Flashes explosive hitting ability. ... Reads the action quickly and is seemingly always around the ball. ... Good lateral quickness, acceleration and smooth change-of-direction agility while in zone coverage. ... Attacks underneath routes and rarely allows the receiver to cross with the ball unscathed. ... Closes quickly on the ballcarrier. ... Receivers are cognizant of him when going over the middle. ... Quick enough to hang with receivers for a few seconds in the deep half. ... Among the more reliable open-field tacklers in the country and should be an excellent last line of defense at the NFL level. ... Accomplished blitzer. ... Few have Chung's ability to explode into ballcarriers while wrapping their arms securely. [see more...]

New Era Scouting: May not be able to get much bigger...a little stiff in the hips when he has to turn and run...Doesn't have great deep or recovery speed...Does have some trouble racing down opponents if they break away because of his lack of elite deep speed...Average hands. Has dropped some interceptions. Used in the past as a cornerback and returner, which says something about his hands. [see more...]

NFL Draft Scout:Questionable deep speed and is a bit shorter than scouts prefer because of their coverage duties against tight ends. ... Physical player who can get a bit grabby while in coverage, leading to some holding calls. ... Attacks the line or underneath routes too quickly, leaving room for the deep ball behind him. [see more...]

Scott Wright's NFL Draft Countdown: Is a bit shorter than you'd prefer...Does not have great speed...Can be too aggressive at times...May have some trouble matching up with receivers in man coverage...Not a true deep middle safety...Questionable deep speed and is a bit shorter than scouts prefer because of their coverage duties against tight ends. ... Physical player who can get a bit grabby while in coverage, leading to some holding calls. ... Attacks the line or underneath routes too quickly, leaving room for the deep ball behind him.[see more...]

Patrick Chung: By the numbers!

Chung is a 5-11, 207 lb strong safety who played as a "rover" at Oregon. A rover, by their scheme, was sort of a hybrid free-safety/strong-safety with play calling duties and the ability to freelance as he read the play. Unlike Reggie Nelson who was sent out to make plays with very little scheming, Chung was the quarterback of the Oregon defense. He tied the record for starts at Oregon with 51 and never missed a single game due to injury.

His 2008 season saw him make 58 solo tackles and 34 assist, with two sacks and six tackles for loss. In 2007 Chung was returning punts and kickoffs, including one for a touchdown.

Why should he be on the Jacksonville Jaguars?

Because Gene Smith says that his team will draft high-character guys, and there's nothing but good character in Patrick Chung. He's got the attitude that the Jaguars lacked, especially in his drive to keep on making plays for the team. This is not something that's coached, at least not by the time a player makes it to the NFL. Chung would address two critical needs, one at strong safety and another in the locker room as an instant leader. He's the sort of player who will come right in and throw himself into special teams, an area where the Jaguars are constantly finding talent.

This guy, frankly, has Jacksonville Jaguar written all over him. Visit Addicted to Quack for more Oregon news and more about Chung.