Andre Smith now a possibility at #8?

Share All sharing options for: Andre Smith now a possibility at #8? 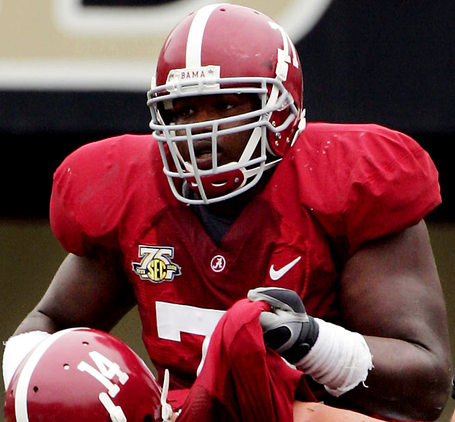 (If you're looking for the article on the possible Jets trade, I took it off as I now realize it's bunk, sorry if I misled anyone)

In the biggest developement so far in the combine, Alabama Left Tackle Andre Smith skipped out on showing up. Click Here

Of the main Left Tackles, Smith has been off the radar the most here at BCC. Not because we don't like him, I personally think he's the #1 overall player in the draft, but because it was assumed he would be off the board by the time the Jaguars picked.

Now on the other hand, this is where things get interesting. Smith was suspended for Alabama's last game at the Sugar Bowl and there were some other character concerns in the mix. Smith was in the running to be the #1 pick, and now may have thrown himself out of that mix.

Now here's the paradox for Gene Smith. I can almost gurantee if Smith is there at #8, he'll be #1 on their board. However, character concerns do raise red flags.

What do you guys think?