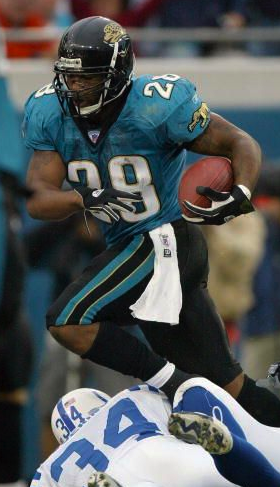 It's hard to say goodbye:

2009 will be a very strange season for the AFC South.  Two giants among men, Fred Taylor and Marvin Harrison will be suiting up for another team, one that's likely to take them out of the division.  Both players spent over ten years with their respective franchise, and to an extent, represent the best and brightest of their teams history.  Fred Taylor, without any doubt, is the best player in Jaguars history.  Marvin Harrison will be forever linked to the offensive success he's found with Peyton Manning.  Both players found themselves on the outside looking in at their teams due to their contracts.

[Note by River City Rage, 02/25/09 1:04 PM EST ] If you're a Colts fan, please skip the next paragraph.  You'll get all the flattery of Marvin Harrison in the rest of the post, but without the hostility.

Now, in all fairness, this could be an article that praises the Jaguars for handling the Fred Taylor situation with class and dignity and degrades the Colts for demanding that Harrison take a pay cut, but I'll refrain.  Instead, I'd like to explore what it means to release a player that nearly defines your franchise.

The Jacksonville Jaguars find themselves in a position where a roster spot is worth more to them than productivity on the field.  Fred Taylor would have taken a pay cut to stay with the Jaguars, but was allowed to leave because no pay cut could replace the value of the roster spot that Fred would hold instead of a developing player.  There is, of course, no guarantee that said developing player will be nearly as impactful or important to the team as Fred Taylor, in fact there's no way any player can replace Fred in that sense.  Rather, the Jaguars must commit space on the roster toward developing a new team, they need every spot available to them for a young player so that they've got every shot to be evaluated and developed.

The Colts, on the other hand, find themselves with the declining skill set and overwhelming salary of a player that they've already replaced with Anthony Gonzalez and Reggie Wayne.  They too can use the roster spot of Marvin to develop young talent, but did the right thing in parting ways with the veteran.  It's beyond rare for a player to spend his entire career with a franchise.  That Marvin and Fred did spend so much time with the Colts and Jaguars speaks volumes about their importance to their teams.  That both became free agents before the start of free agency shows that their teams respect them enough to let the move on.

I grew up with Fred Taylor wearing Teal and White (or black).  I've not known a Jaguars without him since he was drafted.  I argued for him when he was called fragile Fred and I'll never forget his spectacular runs.  Marvin, on the other hand, brings bad feelings, simply because he was as close to uncoverable as you could get.  Marvin reminds me of the many close games with the Colts that were put away as losses because Marvin ran a route so crisply and was in total sync with Peyton that the best the Jaguars could throw at them was not good enough.

So in this post, at this moment, I say good bye to Fred Taylor and good riddance to Marvin Harrison.  The AFC South is worse for their absence, that's for sure.