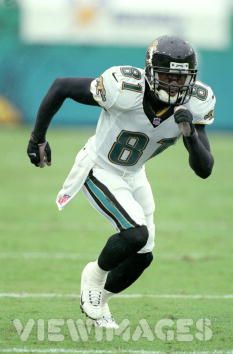 A new series I'm going to be starting up as we count down to the draft. A trip down memory lane, to look back at other Jaguars who have had the burden of being the "Future" of the Franchise. As I believe a player needs 3 years before being truly "Graded" Reggie Nelson and Derrick Harvey are out of this list. Now that we have the semantics down, let's get on with the man who has the honor of being "First" or last.

Soward was a player for whom the sky was the limit with his athletic ability. He has a great combine and would seemingly be a Top 10 pick. Until you accounted for run ins with the law, failed drug test after failed drug test, and everything else.

Then Coach Coughlin figured he was too good to pass up, and took the trouble reciever, by passing future All-Pro Linebacker Keith Bullock who was picked by the Titans a pick later. A move I still think Jeff Fisher must laugh about and consider his "4th win" over the Jags in the 99 season.

Coughlin thought he could turn Soward into the next Jimmy Smith. Instead, what followed was a career that is only saved by Jacksonville's media market and Ryan Leaf as being remembered as perhaps the worst of any 1st round pick in memory.

Soward only played in 13 games, and had a grand total of one touchdown reception as a Jaguar.

As the years have gone on, more has come out about Soward and that year. Soward had suffered from depression, and combined with the pressure of being a 1st round pick, he receded deep into alcoholism.  As someone who has had his fair share of troubles with the bottle, I can sympathize. However, I wasn't being paid millions of dollars to play football either.

Soward has since bounced around the CFL and Arena League. The last I had heard, he was a TV repairman in the LA area. Such a shame for such promise.