Share All sharing options for: On Keeping Gerald Sensabaugh:: Players or Picks? 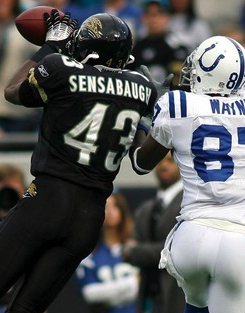 The Jacksonville Jaguars, under the leadership of Gene Smith, are charting a new course in regards to how they build and develop players. One of the quickest ways to renew and refresh a roster is through the acquisition of compensatory draft picks. When a player leaves for another team through free agency, the NFL can award draft picks if the team is seen as having a "net loss". Teams that let players leave and only mildly dabble in free agency can accrue many second day picks this way.

Compensatory Draft Picks, for example, were a big role in how the Jaguars and Titans extracted themselves from their salary cap situations of the early 2000's. One could argue, of course, that it's somewhat unfair for the league to give teams an easy way to replenish the roster after grossly mismanaging the salary cap, but I digress.

So the Jaguars are going into the 2009 free agency period with their hands in their pocket and the checkbook closed. They're going to let players like Reggie Williams, Khalif Barnes, Mike Peterson, and Joe Zelenka enjoy the free agency waters and more than likely lose them to another team. Some, like Barnes and Williams are "good riddance" players, others like Zelenka are harder to swallow.

Gerald Sensabaugh is a player that should not make it to free agency. He's developed under the Jaguars system and had a season in 2008 that was one of the few bright points on defense. Of course, he's playing for a contract and was the only Jaguar with anything to play for in December, which might have helped.

Anyhow, Gerald is going to hit the free market and I think the Jaguars are making a mistake in doing so. Gerald isn't the best free agent safety on the market and he's not going to merit Bob Sanders money. He's a player that the Jaguars have invested time and money into, letting him walk now that he's established himself as a player is a terrible idea. Not to mention that it creates a need at Strong Safety that must be addressed in the draft. (Though, I'll be OK if we get Patrick Chung). The Jaguars have the right idea in building the team through draft picks, but there's no sense in letting a proven player leave. Sensabaugh can be retained without breaking the bank. Besides, didn't we hear all season long that the locker room was broken because of the money given to "outsiders" like Drayton Florence and Jerry Porter? Wouldn't rewarding a player like Sensabaugh address that issue? I'm not all about using contracts as a locker room management tool, but if it has an added bonus, why not?

Maybe I'm not thinking rationally. Maybe the approach of Gene Smith to keep his eyes on the ball two years out is a smart move. Saving money in 2009 for a better year in 2010 isn't the worst idea in the world. I just hate to see the Jaguars enter the draft with more needs than they can realistically begin to address.

What do you think?