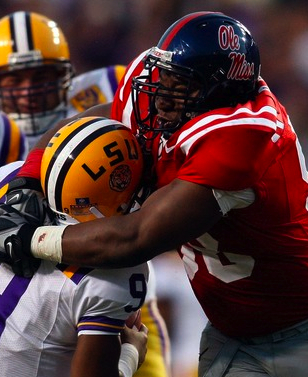 No, it's not a typo, his name is Peria Jerry, not Jerry Peria as he's been called during the draft season.  His first name is pronounced "pa-Ray", and he played defensive tackle for Ole Miss.  He is also the polar opposite defensive tackle to previously previewed B.J. Raji in that he is a pass rushing with deep penetration who's skill set is that of a backfield disruptor.  For the Jaguars, he's a different sort of compliment to John Henderson in that he'd be the benefactor to John's double-team and could offer pressure up the middle to force a pocket passer off his spot.

The absence of pressure up the middle by the Jaguars defensive line is an issue that must be resolved in 2009, both Raji and Jerry offer solutions to that problem, though at some cost.  Jerry is best projected as a mid first round pick.  Unless there is a very impressive performance at the Scouting Combine/ Ole Miss Pro-Day, he'll be too much of a reach for the Jaguars at 8th overall.  But that does not mean he's not worth looking at.  The Jaguars, fingers crossed, will be able to trade backwards with someone, hopefully between 12-17, the latter of which is a very comfortable area for a player like Jerry.

Of course, the debate will rage as to whether selecting anything other than offensive tackle in the first round is a good move for the Jaguars.  I hate to get away from best available player, but every time I salivate over a first round defensive prospect, I think about David Garrard being the most hit quarterback in 2008 and start to doubt the idea.

Peria Jerry: By the Numbers

25: Peria will turn 25 on our around the 3rd preseason game of the 2009 season.  That brings a level of emotional maturity to the table, though it means that he's going to peak much sooner than you'd like out of a DT.  But age is just a number, he's got low miles.

Two of his cousins, Eddie Strong and Dwayne Rudd both played in the NFL, so he's got the bloodlines to make it at the professional level.

"LISTEN TO YOUR (EXPLETIVE) COACHES!" Peria Jerry screamed at his teammates.

Mocking the Draft: Jerry is a defensive tackle who plays a lot like an end. He has a great burst off the line, reminiscent to Sedrick Ellis of the New Orleans Saints. Uses his quickness to get inside guards to beat blocks and get into the backfield. Adequate lower body strength to take up double teams. A hard worker who will play down the field until the whistle. Has quick hands to work off double teams.  [see more...]

NFL Draft Scout: Quick, active three-technique tackle. ... Good height and adequate girth inside. ... Very quick off the snap, able to beat the down block by tackles or penetrate to force the quarterback to rush his decision. ... Gets his hands inside guards' jerseys to push the pocket. ... Chases downfield on plays away from him, and works hard to make a tackle when the ball is in his area. ... Uses his hands well to defeat cut blocks inside. ... Handles double-teams pretty well when playing the nose considering his height, and is able to get off the double to get to the ball. ... Emerged as the unquestioned leader of the Ole Miss defensive line.  [see more...]

Mocking the Draft:  Needs to get stronger to hold up better against the run. Gets too tall in his stance at times, allowing linemen to cut under and him control him. Injury concerns are concerning. Had arthroscopic knee surgery prior to the 2008 season. [see more...]

NFL Draft Scout: Takes a lot of plays when slanting toward the action. ... Needs to play stronger at the point against the run. ... Can play a bit high in rushing situations, causing him to lose the leverage battle. ... Lacks great awareness, as he does not keep his eyes in the backfield. ... Takes himself out of plays too often.  [see more...]

Scott Wright's NFL Countdown: Does not have great size or bulk...Frame is awfully close to being maxed out...Not very strong or powerful...Isn't real stout at the point of attack...Has to be more consistent with his leverage...Can get pushed around in the run game...Struggled in the classroom and intelligence may be an issue...Older than the average prospect... [see more...]

Why Should Peria Jerry join the Jacksonville Jaguars:

Much like B.J. Raji, Jerry solves a problem for the Jaguars that hurt them in 2008.  The Jaguars get a developing big guy in the middle of the defense to build the line around and open up chances for Harvey, Groves, Hayward, and Henderson to make plays.  If you increase the pressure on the quarterback, you decrease the pressure on the defensive backs to make plays and raise the level of performance for the entire defense.

That said, I don't think Peria is there for the Jaguars without a significant move backwards.