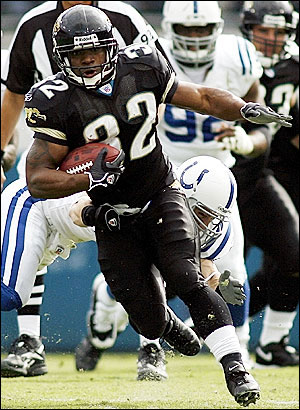 The sooner we know he'll be in Teal and Black for a while, the better

There were a five things I wanted this franchise to do before the first Pre-season game kicked off this year. I figured they would help aleviate the bitter taste in all of our mouths from 2008 and help set the team in a positive direction. This is an updated list of those things as well as the progress the team has made on them.

1. Send a sign that the Jaguars have put 2008 firmly in the past

Perhaps what was Tom Coughlin's greatest sin to the franchise was hanging out until the empire he built crumbled around him. The 2000 Jaguars were the most dissappointing in the franchise's history thanks to injuries and age. Instead of seeing the signs, Coughlin tried to keep things intact for one more run. Instead, the team went 6-10 and the Dark Ages had officially begun.

The 2009 Jaguars needed to distance themselves from their 2008 selves so that we could really begin the quest for a Super Bowl anew.

Progress: Shack Harris resigned, Gene Smith has been appointed GM, Jerry "A new car every week" Porter and Drayton "What's a Wide Reciever" Floerence have been cut, and it seems the Jaguars will truly start 2009 anew.

Verdict:I'm very pleased with the progress so far and hope it continues through the draft.

2. Have Maurice Jones-Drew signed to a long term deal by the start of the season

MJD is the face of the franchise, and now the Fred Taylor has been shown the door, THE main weapon the Jaguars have on offense. He can't be allowed to even sniff free agency, where a team like Dallas or Washington could offer him the moon and the stars, leaving the Jaguars with squat. There is of course always the franchise tag, but that may sour the relationship the team has.

Progress:Reports are the Jaguars and MJD are close on a figure.

Verdict: While nothing new has come out since Jones-Drew confirmed both sides were close in guranteed money, I'm taking the attitude no news is good news.

3. Have the stadium issue resolved

While some of you may be thinking of the naming rights issue, I am referring to the $143 million in repairs the Jaguars requested as detailed here.These are the kind of snowball effects that could lead to the Jaguars leaving. $143 million may sound expensive, but as I said, I would rather spend that on repairs then $700 million on a new stadium.

Progress: To my knowledge, there has been little coverage outside of the Times-Union article

Verdict: Hopefully things are being settled behind closed doors. I'm sure the City knows handing over $140 million to the team in this economy is political suicide.

4.Have strong leadership in the front office

The three headed approach under Shack Harris had gotten us a multitude of busts in the draft and free agency. Reports of bickering on draft day were a yearly event, and something had to be done.

Progress: The alpha and omega, Gene Smith, has appeared. Except for when Tom Coughlin ran the front office, this is easily the most forceful any head personnel guy has been with the Jaguars.

Verdict: Bow before your new ruler

5.Get MJD on the Madden Cover

Seriously, we need a Jaguar on the cover of the biggest piece of NFL merchanise.

Progress: Sadly nothing so far outside of EA posting a big "Coming Soon" over the Madden 2010 cover.