An Old School Fan Sounds Off

Share All sharing options for: An Old School Fan Sounds Off

Here is a quiz, as a football fan, which one of these two images gets you more  excited? 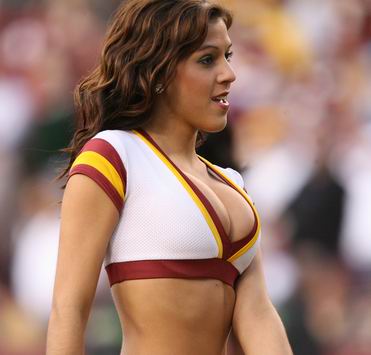 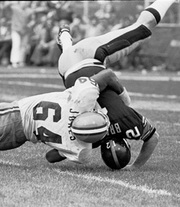 Ok, I know I made it hard, she is awfully cute. For me, I see beautiful women all the time in the dance world, what I don't get to see a lot of is the quarterback going down hard. If you are a Browns fan that picture is a highlight memory in football history. It was October, 1976; the Steelers came to Cleveland after beating the Browns 33-14 earlier that year. Fourth quarter, the Browns up 15-10 when Turkey Joe Jones busts through, picks Terry Bradshaw off the ground and pile drives his head into the turf. The whistle blown, the flag thrown, Bradshaw lay there motionless, we stood and cheered. Bradshaw had beaten us so many times, we wanted him down and out in the worst way and Turkey had just delivered the shot we all wanted. Now I am not saying we wanted Bradshaw hurt for life, but a bit shaken, a lot intimidated, maybe sit out the rest of the game groggy was fine with us. We were relieved when he got up, but glad when he left. This is football, domination is the rule.

Football is a very violent game; no team sport even comes close to the level of violence in football. Winning a football game is simply a matter of physically and violently pushing another human being to the point of capitulation. It is the physical imposition of your will over another. That is what "run the ball, stop the run" means. This is not basketball and attempts to make it like basketball will fail. To love football is to appreciate the violent struggle within the game. What brings you to your feet is the total vanquishing of an opponent. It is a primal emotion and affects us deeply inside. We will not be dominated.

The players that play this game do so understanding that they put their lives on line. They face serious injury or death every moment they are out there. Linemen have a life expectancy of 53 years, 20 years after retiring; odds are they will be dead. Most have trouble walking after 40 years old. When I see a wide receiver catch a ball and break free, I have the same reaction as when an antelope outruns a cheetah to escape with its life. It is a very dangerous game.

As fans we have a choice to turn away from the violence and leave the game forever. I've considered this every time someone sustains a serious injury. When Kevin Everett of the Bills took that horrible neck injury I almost walked out on football. Where I landed was to understand and to stand there with these gladiators and let them know that their struggle is my struggle, that their victory is my victory that I am with them all the way. They love playing this game and do so with full knowledge of the risks and a love for the glory it brings. If they are going to play and play hard, I am standing with them. I respect all the men that play the game no matter what team they are on.

For me, to really feel the game and be a true fan, one must hate the other team and hate the thought of losing to them. This is not a game played for fun as much as it is a physical war. The proper football attitude was summed up by Vince Lombardi, "Winning isn't everything, it is the only thing". If it becomes ok for us to lose, consider what Larry Bird said, "I hate losing more than I love winning". To not hate the other team for even trying to humiliate and dominate our champions is to diminish the fight they are going through. In order to truly appreciate the effort and fight, we have to feel it, just as it is happening in the trenches. We have to know what they are going through, the pounding they take, the comments on their mothers or wives, the cheap shots aimed at maiming them for life. We have to cheer when they succeed in a way that lets them know we are in there with them. I don't advocate cheap tactics to win, I revile against it. If football becomes a cheap shot game, I will leave it forever. I do honor the fight and the victory and have an intense passion to win.

Football is at its best when the emotions run high, when both teams gear up to go to war. It is best when the animosity between teams and fans run at a fever pitch. Most good NFL cities have a rivalry which is deep and bred into the culture. The children in these towns are raised to hate the other team; no one questions it. That is simply what supporting the home team means. No matter the record, or what is on the line, we do not fall to that other team, period. The NFL loves rivalries, the warriors love the rivalries and the television networks love the rivalries. When the NFL realigned the teams, it took great care not to disturb these rivalries; it is the essence of good football. The reason Cleveland received a team back after it moved to Baltimore was because the Cleveland fans know how to go to war, they know how to bring the emotion, and most of all, it is impossible to be the Pittsburgh Steelers without the Browns. To be a champion, you have to conquer, and the fans of Cleveland love to tear those Steelers down. True champions need a real fight and Cleveland and Pittsburgh bring it.

I became a fan of the Jacksonville Jaguars when I moved here and purchased my 2006 season tickets. I didn't know what to expect but loved football and looked forward to the night game against the Steelers. Ben Roethlisberger had just gotten out of the hospital for appendix surgery; he honestly didn't belong out there. Early in the game, John Henderson broke into the backfield and hit Ben hard. I saw the moment of capitulation, Ben was afraid for his life that night. The Steelers played hard but later in the game Big John raised his arms and pumped the crowd, his face on the big screen. We all understood, the moment of final victory was at hand. John was signaling the final blow was about to be delivered. We rose to our feet and cheered and the team delivered. That 2006 Jaguar defense made me a real fan as long as I am here in this town. Real football was played here. The emotion of the game was alive in Jacksonville.

Earlier in the week I posted something that didn't stay up long. Most of you never saw it, it was up in the middle of the night and down within the hour. In it, I went after the Indianapolis Colts fans. After watching the Jaguars for three years, I've decided I hate the Colts. They are the team I want to see us beat more than any other team. I don't like the Colts fans and I wanted them to know it. I caused Chris a bit of problem and I regret that, but I don't apologize for the sentiment. I want the Jacksonville Jaguars to totally vanquish the Indianapolis Colts every single time and I want their fans to feel it hard. I want Big John or someone to break through the line and break the spirit of the Indianapolis Colts. I want a real rivalry.

In my world, Jacksonville doesn't need some national media guy giving us respect. It doesn't need a cartoon mascot or girls in boots and cowboy hats dancing to Cotton Eyed Joe. I also don't think it needs a stadium sound system the equivalent of AM car radio. Put in a kick butt sound system, play some loud music and show me some bell ringing, molar loosening hits. Show me Payton Manning running for his life and begging the referee to defend him. Let me see the Colts fans with fear on their face. That's all I need, to hell with everything else, let's play some football. Let's dominate.

So I don't know where you stand on this issue Jacksonville, just leave a comment, but to be honest, I don't really care; I am ready right now for the 2009 season to begin.