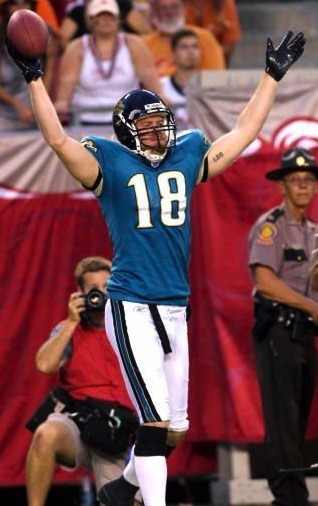 Matt Jones: so much wasted potential:

In what can only be described as a predictable move, wide receiver Matt Jones was released by the Jagaurs today after his recent arrest for a probation violation.  While the actual violation was small, in this case drinking beer on the golf course, the spirit of the law and the "New Jaguars" required that Gene Smith once again make the tough decision and let Matt Jones walk.

Then again, maybe it's not that tough of a decision.  Matt Jones has never been a football player.  He's always seen himself as a basketball player who happens to play football and carried himself accordingly.  His heart and passion for the game is legitimatly questionalble and despite a good season in 2008, was a vast disappointment from the hyped-Arkansas quarterback we drafted a few years ago.

Matt's absence leaves the wide receiver posistion in a bit of a mess.  Dennis Northcutt, who's in his own legal trouble, Troy Williamson and Mike Walker will have to run the show.