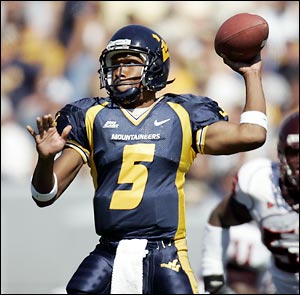 Pat White represents something of an enigma for whoever drafts him. Originally everyone pegged him making a Matt Jones-ish transition to WR, but his Senior Bowl and Combine performance have made some re-evaluate him as a true NFL QB.

What does White offer the Jacksonville Jaguars should he end up in the Teal and Black?

White certainly isn't your prototypical 6'4, 225 lb QB who stands firm in the pocket. He certainly has a good 40 time and is elusive.

FF Toolbox: Consistently got better as a quarterback throughout his time at WVU

NFL Spot: White is highly athletic.  He has good speed and can change direction quickly.  When White has the ball he's a threat to score on any play.  His vision, and elusiveness in the open field made him the most dangerous player in college football when he had the ball.

Draft Countdown: Lacks the physical skills to make it as a consistent starter

FF Toolbox: White will not be a quarterback in the NFL. He is practically a running back, but he will not be one of those at the next level either.

NFL Spot: The fact remains he is undersized and lacks experience as a pocket passer.  I suppose at this point the one of the main weakness' of Pat White is his reluctancy to change positions and show scouts what he can do as a receiver.  As a passer his elongated delivery doesn't play in his favor, and his accuracy can be inconsistant.

According to the Blogosphere

I contact the guys over at The Smoking Musket, SBN's Mountaineer blog, and this is what they had to say on White

On Pat White being a winner...

You're going to see a lot of scouting reports between the combine and the draft talking about Pat White being a "winner."  It's a true statement, but somewhat disingenuous the way it's used by these scouts.  The label "winner" is almost always preceded or followed by a long diatribe on why White won't succeed at the professional level as a QB.  Then, under positives, we get "winner," like that's supposed to negate everything the scout just wrote.  Well, as a Mountaineer fan, I'm here to tell you that Pat White is a winner, and in my mind, will continue as exactly that, regardless of position.

White went to the combine expected to feign skill at QB and then quickly start his transformation to wide receiver.  Well, a funny thing happened, as White completely outshone every other signal-caller in Indianapolis.  Of course, with his lack of skills and arm strength, there was no way White was going to be able to compete with the big, bad Mark Sanchez's of the world.  But there he was, throwing deep outs with laser-like accuracy while Sanchez and Co. struggled.  Sure, maybe in hindsight, it was foolish to doubt the only QB in NCAA to history to win four bowl games (two of which were of the BCS variety).  But, don't worry, White's seen it before.  And he'll continue to see it, up until the point where an NFL team gives him a shot at quarterback.  Sure, he might not make it as a starter in this league -- few do.  But he deserves that shot.  Expect that last point to be further driven home during White's pro-day at WVU.  And if it doesn't happen for White, he'll make that move to WR.  Then, at that point, I fully expect him to succeed there.  I guess I could doubt him, but four years at WVU have taught me not to.

Why Should Pat White Be a Jaguar

If Gene Smith wants a team player who will give 110% and not care if he gets the ball on every play, he'll want Pat White. If he wants a guy who has something else "Click On" at kickoff, he'll want Pat White. White offers many different play making abilities, and do so while we figure out if he could actually be a Quarterback in the NFL.