Share All sharing options for: Starting at WR, #81, Torry Holt? 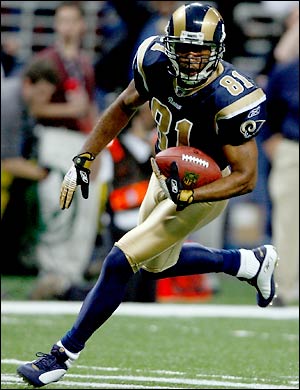 Holt is 32 and would be in his 12th season if he starts 2009 as a Jaguar. However, Jimmy Smith posted three 1,000 yard seasons after 32. Let's be clear, Holt is no longer the dominant #1 receiver he was for most of his time as a Ram. However, he would be head and shoulders above any of the current receivers the Jaguars have.

If this is a situation similar to Tra Thomas, I'm all for it. If we can pick Holt up on a low risk contract, where all the guaranteed money is up front, then I say go for it. What do the Jaguars have to lose? He instantly lands them credibility as a legitimate threat.

Even if we don't sign him, what's the risk of bringing him in for a visit. What can it hurt? If nothing else, ESPN might actually stat bother to get our players names right again.