Just as a quick foreword: This is going to be somewhat boring and my usual sarcasm and pessimism is going to be replaced by cut and dry ideas. Thank You

As Terry's last article indicated, the Jaguars do get plenty of support from the metropolitan area. According to Census estimates, Jacksonville has 1,313,228 residents. Couple that with the average attendance, and I believe Jacksonville is still "overachieving" in ticket sales.

However, his analysis is somewhat flawed. While close to five percent of the metropolitan area attended home games every Sunday, the real number the Jaguars want is season ticket holders. If the estimate of 35,000 season ticket holders is accurate, that puts the number down to 2.7 percent. Visually, it can be represented as follows: 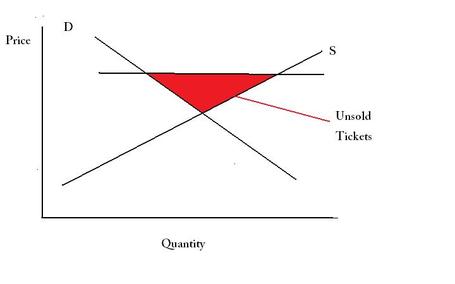 The "D" line is the demand line, while the "S" line is the supply. As is apparent, the Jaguars are suffering from an excess of supply at the moment. The situation the Jaguars would prefer to be in would be represented as follows: 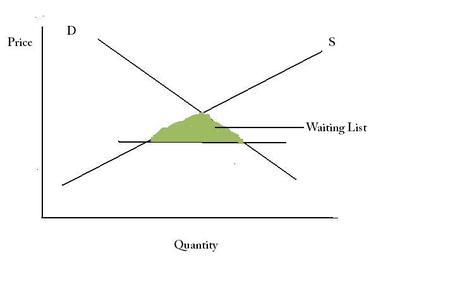 1. Shift the Supply Curve to the left, or in laymen, reduce the supply of tickets.

This has already happened with the infamous "tarps." I agree the stadium was built far too big simply so the city could "Have its cake and eat it too" with the Florida-Georgia game. However, the team can't afford to place additional tarps or restrictions on the stadium.

Obviously, this is what everyone would ideally want. While not exactly a price cut, the half packs that are already on sale should spur ticket sales. Personally, I may pick up some cheap seats with the "Black Pack." However, with tickets already at some of the lowest in the league, how much further can the Jaguars go? Wayne Weaver has operating expenses to cover, and hopefully a profit at some point. Still, I wouldn't be surprised if the Jaguars announce some kind of plan where you get a discount if you commit to multiple years.

3. Have the demand curve shift to the right

This can come in one of two ways. The first is that Jacksonville's population continues to grow as the city becomes a real metropolitan hub. The 2.7 percent season ticket rate I mentioned earlier may be somewhat low due to the economic climate the country is in. Let's say in a normal economy it is 3.5 percent of the metropolitan area. The Jaguars would then need around 1,950,000 people to live in the Jacksonville area for every ticket to be sold as a season ticket.

The other is that, as first generation Jaguars fans graduate from high school and college, and can afford season tickets on their own, demand will grow as well. I think the team's hopes may well rest on this option. Soon, it will be the first time in the franchises' history they won't have mostly converted Dolphins, Buccaneers, or whoever else as their fan base.

As I've said before, the Jaguars have constantly been on the doorstep of being a consistent winner only to falter. If the team can string together a few winning seasons, then the ticket woes should disappear regardless. The Jaguars need to consistently win, not have the roller coaster experience that has been the Jack Del Rio era.