Football Economics: Why the NFL's blackout policy is outdated

The blackout policy that has been in place since the 1970's is supposed to act as that extra "nudge" to get fans to buy tickets. If the general bowl isn't sold out, no game on TV. The idea is that if ticket sales are lagging, the blackout will hopefully shock enough people into buying tickets that the next home game will be sold out.

Why the Rams and Raiders left Los Angeles

A case study of the NFL's blackout policy can be used with it's last two LA teams. The Raiders and Rams both played in the LA Coliseum at various points. They both left due to it's huge blackout number. Because the Coliseum lacked any "Club" seats, it's blackout number was approximately 100,000. Needless to say, home games in the LA area were blacked out more often than not. The blackout situation and the constant red tape surrounding stadium projects are what eventually led the teams out of LA following the 1994 season.

How this applies to the Jaguars

Vic Ketchman has his position on blackouts quite clear. Even if one ticket if left unsold, then the game doesn't go on TV. That kind of thinking would only hasten the Jaguars heading to London, LA, Mexico City, or where ever else the national media thinks would grab headlines.

In economics, there exists the term externality. An externality is an external affect that can be positive or negative that results from actions a firm takes. In this case, the firm is the Jaguars. and the externality is the affect of fan support resulting from the games being on TV.

Marginal social benefit is a different thing entirely. The social benefit is what the city of Jacksonville gets out of the deal. When the Jaguars are on TV, not only are grills going around the stadium, but I guarantee they're going all over the city. People all over the city make plans around the game. Around town, everyone is buying hot dogs, burgers, beer, etc and the entire town gets a nice boost ten times out of the year.

That wouldn't happen if the game is blacked out. As much as I love Brian Sexton, in this day and age, if it isn't in full color no one cares. '

Not only that, but in the area between the marginal benefit and marginal social benefit is where the Jaguars can get even more potential ticket buyers. The graph below is intended to give you a visualization of the concept. The numbers aren't that important (I copied and pasted it from an old economics assignment) but it does the job. 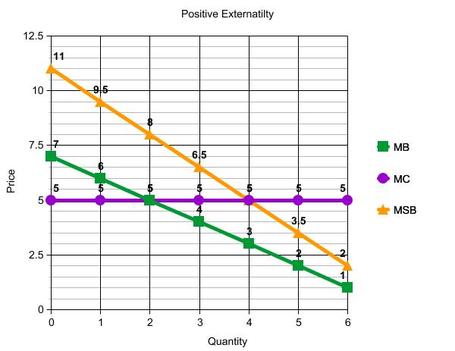 The question is, how do the Jaguars then benefit at all from allowing their games on TV even if the game isn't sold out. Simple, the Jaguars have to get their brand out there to be seen. Like it or not, the Jaguars are in competition with the Buccaneers, Dolphins, Gators, Seminoles, Bulldogs, and every other team that has some presence in North Florida. If the Jaguars game isn't on CBS, I can simply turn the dial to FOX and watch the Tampa Bay-Atlanta game. Or even better, I can go watch either the Noles or Gators on Saturday. Simply put, if the Jaguars game isn't show on TV, they suffer.

I'm sure we've all been to a party and watched a home game on TV. Think of all the people you see wearing a Jaguar polo or jersey. If the game isn't on TV, they reduce their chances of convincing someone to buy that.

In addition, putting the games on TV will get the team to sell more tickets. I'll wait a minute for those people who's socks just blew off after that statement.

The Jaguars have to make their product known and worth a minimum of $400 per seat per year. You don't do that by with holding it from the general public. The games on TV are the best free advertisement the Jaguars can get for selling season tickets. The more people who watch at home, the more chances you have of someone saying, "Hey, it would be a lot of fun to go down there next year."

I have four tabs open right now on my browser. One is obviously the story editor, the other three are various articles on the current state of General Motors and what it can do to get out of bankruptcy. The entire economy is in the tank, and may stay there for awhile. When a heritage franchise like the Lions can't see out their games, things are in trouble.

The NFL is no longer baseball's ugly stepsister. It's the most powerful professional sports organization in America. The blackout policy was put in place to make sure tickets would be sold, as the demand for football wasn't as great as it is today. Today, football is king. The NFL can afford to allow all of it's games to go on TV.