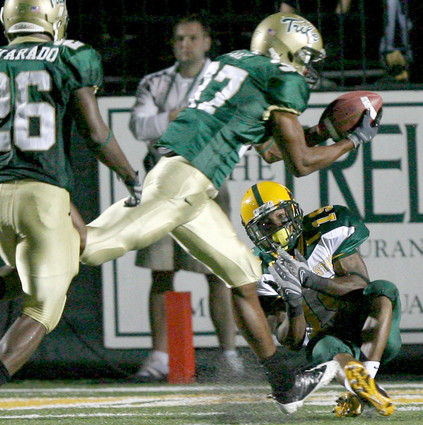 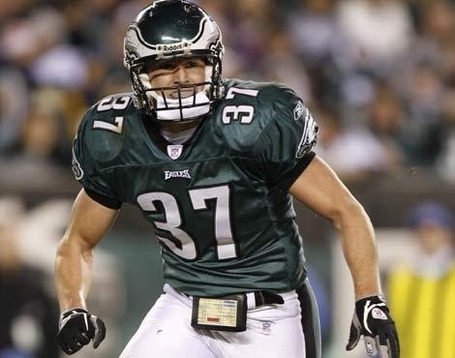 Three camp battles will define how the Jaguars will head into the 2009 season. Those will be for the left tackle, right tackle, and the secondary's starting spots. This article will be focusing on the secondary positions up for grabs.

Several sources have stated that their is something of a three way battle going on between Sean Considine, Brian Williams, and Derek Cox. Brian Williams seems to be locked in as a starter, however, his position will be determined by Considine and Cox. If the team looks better with Considine at safety and Williams at corner, Cox will be fighting for the nickle spot. If Cox shows why we traded away next year's 2nd round pick for him, then he'll be the corner and Brian Williams will be the safety. So then, what does each player bring to the table and how should things shake out?

Considine is a five year veteran out of Iowa who has played his entire career with the Philadelphia Eagles. Our Yuengling drinking brethren at Bleeding Green Nation aren't too fond of him.Considine started 17 games for the Eagles in 2006 and 2007. His best year statistically came in 2006 where he managed 86 tackles, 60 solo, and one interception. However, after going on injured reserve in November 2007, Considine lost his starting job and never got it back. Considine spent the rest of his time in Philly primarily on kick coverage.

Obviously, Considine isn't expected to be a barn burner at safety. However, he is easily more physical than Brian Williams, which is necessary at the strong safety spot. Being honest though, Considine was originally signed to be a special teamer and back up SS. Then Gerald Sensabaugh found it necessary to move to a state with more gun friendly laws. If Considine gets the starting job, as long as he isn't expected to cover anyone worth a lick one on one, the Jaguars should be able to get by.

Brian Williams was slated to compete with Gerald Sensabuagh for the strong safety position in last year's camp. Then the team realized that Drayton Florence couldn't cover the broad side of a barn, and he switched back to the right corner position. Williams is still the current starter at right corner, though that might change.Williams is not the best fit to play strong safety. At 198 pounds, he would be one of the lightest in the league, and doesn't have much experience at the position. He is physical for a corner, however, can he be relied on to go all out as the eight man in the box?

Smaller strong safeties also have been known to be struck by the injury bug(see: Sanders, Bob) because of the physical nature of the position.

Derek Cox may well already be the most famous third round pick in Jacksonville's history. He put up impressive numbers at his Pro Day that made the Jaguars go for him well before anyone else had him going. The biggest knock on him is that he played his college ball at I-AA William and Mary. Cox was reportedly a man among boys there, however, he may have issues dealing with NFL speed.

Early reports make it seem he is holding his own in OTAs, which is encouraging. No matter how the line up shakes out for opening day, Cox is the future of the defensive secondary. Gene Smith invested a second round pick in him and he needs to show why he was worth that investment.

Where is this all going?

The Jaguars seem to be stuck in a Catch-22 in regards to the secondary position. They have a known product if they place Williams at corner and Considine at strong safety. However, that product would be a very weak one compared to a hopefully rebounding Rashean Mathis and Reggie Nelson.

Cox and Williams represent an unknown but potentially very good combination. This relies on Cox adjusting to the NFL and Williams being able to play the safety position.

I say Cox at corner and Williams at safety is where the Jaguars should go initially. If it busts, oh well. If not, then the Jaguars could finally solidify their secondary, something we all know the importance of.