Share All sharing options for: Dr.FSBA: Or Why Northcutt's release/trade means more between the lines 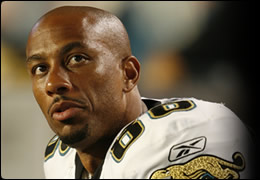 As Dennis Northcutt's days as a Jaguar are number, I feel the need to sit back here and look at where this team is heading and where it has been. I forget which poster said it, but they said it best, "I couldn't wait for the day the receiving corps was good enough to cut Dennis Northcutt." Last year at this time, the core receivers were Jerry Porter, Northcutt, Reggie Williams, Troy Williamson, and Matt Jones. Let's go through each one, shall we?

Jerry Porter: His best year's came as a number three wide receiver behind Jerry Rice and Tim Brown. A known trouble maker who may single handily personify all that was wrong with Shack Harris' free agent signings after year one.

Reggie Williams: I'm debating whether Reggie deserves to overtake R Jay Soward as the worst pick in Jaguars history. Williams was picked twenty picks higher, and yet he only had marginally better results on the field. Excluding his 10 touchdown receptions in 2007, did he do anything of note that should've kept him on a NFL roster for five years?

Troy Williamson: Same thing as Reggie, except he doesn't have a 10 touchdown year to his credit. I won't even get started on his comment about duking it out with Minnesota head coach Brad Childress.

I look back at the articles on BCC at the time and I wonder how my glasses now don't have a permanent teal and black tint to them. We were honestly trying to convince ourselves this team could make a Super Bowl run with that receiving corps. A receiving corps with words like "Lazy, underperforming, uninterested, bust" scattered across their resumes. Yeah, they would help us host the Lombardi Trophy.

This Jaguars team now has an actual veteran who has acheived something in Torry Holt, and young wide receivers who were value picks in Mike Thomas and Jarrett Dillard. The WR corps may not light the world on fire, but it won't be better suited for the old NFL Europe either.

Finally, the day has come that the wide receiver corps was good enough to let Dennis Northcutt go.