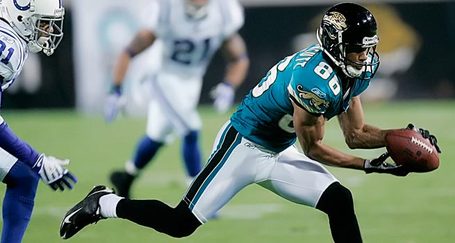 And then there were two...

The Jacksonville Jaguars have traded Wide Receiver Dennis Northcutt to the Detroit Lions for Safety Gerald Alexander. It was recently reported that Northcutt would be allowed to work out a trade, something that I thought would only end in the release of the somewhat maligned receiver. Northcutt is the third Jaguars receiver to find himself going from the starting roster in 2008 to packing his bags and leaving town in 2009. Clearly, Gene Smith thinks that there is something worth developing in our draft class of receivers and in Mike Walker, Troy Williamson and the esteemed veteran in Torry Holt.

Dennis, in most minds, will be forever remembered for his end zone drop during the playoff game in New England. For me, Northcutt is a relative bright spot in an otherwise miserable history at the position. Dennis did his job, if not more, and did so with his mouth shut. The team needs to get younger and give the developing players the starting repetitions. Dennis, surprisingly, had some value, and brings the Jaguars a former 2nd round pick. I'll admit, I'm learning about Alexander as we speak, but from what I've seen, he's going to be in the mix at strong safety.

As always, in Gene we trust, though Gerald is not without some concerns. He suffered a neck injury which had him sidelined, though according to Alexander, this is behind him:

The neck is no longer an issue, physically and mentally," Alexander said. "Just out there trying to get better every day, learn the system, making good plays, making mistakes. Just trying to get everything right so I'll be ready."

So there you go, Mike Walker, Torry Holt and Troy Williamson are nearly assured roster spots, with Mike Thomas and Jarret Dillard practically locked in as well.

Still, the training camp battle for the 4th and 5th (or maybe 6th) spot at WR will be intense and wide open, the sort of competition that brings out the best.