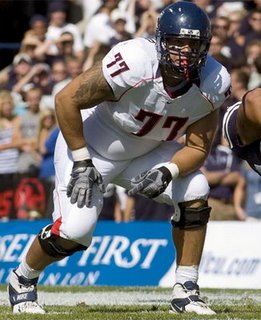 Eben Britton comes to the Jaguars out of Arizona. Britton played Right Tackle for the Wildcats in 2006 and 2007 before switching to Left Tackle in 2008. Britton was a 2nd team All-PAC 10 selection in 07 and a 1st team selection in 08. Whether simply a product of being overhyped by the scouting community, or growing concerns over his marginal ability to get off the snap and foot quickness, he slid from his mid first round projection into the second round. Britton will contend for the Right Tackle position as a rookie, where those concerns are marginalized. Just as Jag fans want Eugene Monroe to remind us of Tony Boselli, can Britton remind us of Leon Searcy?

Eben Britton: By The Numbers

According To The Experts

Britton is a large offensive tackle who has a frame to get bigger and stronger. Knows when the blitz is coming and has the smarts to adjust. Excels at run blocking in line. Started all three years he was at Arizona. He uses his aggression to maintain and finish off blocks. Knows how to use a strong hand punch to jar opponents. Does a decent job getting to the second level, but he needs to seek out defenders better.

Ideal size with a large frame and room to add more weight...Excellent technician who understands angles and positioning...Tough, physical and plays to the whistle...Good strength and power...Gets a nice push in the run game...Has a terrific initial punch...Is stout at the point of attack...Neutralizes defenders when locked on...Outstanding football IQ and awareness..Hard worker..Leader..Durable...Lots of experience.

Britton plays with great awareness, knowing how to use his size to engulf and his quickness to get in front and lead on sweeps. He needs minimal reps to retain and has a firm grasp of the playbook. He is the unquestioned leader of the offensive line and knows all of his other line mates' assignments. He is quick to pick up the game plan and it is rare to see him make a mental error.

Inconsistent off the snap. May not have the great foot quickness that’s required of a left tackle. Needs to slide his feet better instead of taking small steps. Benefited from playing in a wide-base spread offense where he was standing up off the snap. Marginal lateral agility.

Doesn't have ideal lateral movement, may not be able to contain more athletic defensive tackles

Why is Eben Britton a Jacksonville Jaguar

Everything I have read about him suggests he is a leader in the weight room, practice field, and off the field. That automatically gives him major points with Emperor Smith. However, Britton represented excellent value where the Jaguars picked in the 2nd round. I'm sure it was a tough decision between him and Florida State defensive end Everette Brown. However, I think that Britton won out because he can step in day one as a starter.

What to Expect from Him

First things first, Eben needs to try and take the Right Tackle position from incumbent Tony Pashos. It seems Pashos hasn't taken the drafting of Britton lying down, and is in the best playing shape of his career. I would expect their battle to be the headline battle through out the Pre-season. If he does not gain the starting position, then expect him to slide into the Right Guard position.

Either way, it is clear he and Monroe were drafted with visions of Searcy and Boselli in mind. If these two tackles can come close to that kind of dominance, this draft class will be a home run.